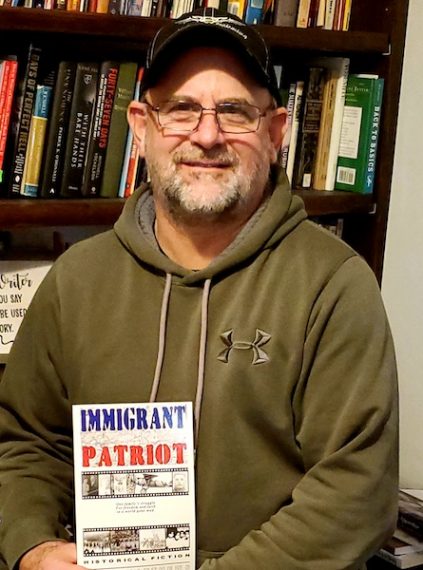 As a newly minted author, Craig Matthews broke into the publishing world with a very poignant story that has history lovers clamoring for more. Immigrant Patriot, a story of love, hardship and grit, is a reflective tale of Craig’s family history. Craig’s been married for nearly four decades to his high school sweetheart—and has an awesome, uplifting “meet cute” story around it. Will there be a book?

Craig and his wife live surrounded by woods in rural Michigan at the end of a dead end road. They have three married adult children, seven grandchildren and currently nine chickens. Craig has always been an American history buff. He enjoys his speaking engagements, reading at the beach, backpacking, writing, baseball, kayaking, playing with his grandkids, storytelling and many forms of creative expression.

And much like his characters, Craig is certainly no stranger to challenges. A former pastor, youth minister, mission leader, construction worker, editor, father and grandfather, he’s seen his share of hardships. Yet he takes them all in stride with such an air of positivity and gratitude. I’m certain you’re going to enjoy getting to know Craig as much as I have.

You are an author, but is it your day job? If not, what does fill your days? I have a day job during the summer, working on a construction team doing concrete work in both residential and commercial applications. During the cold Michigan winters, I get to spend my time building writing skills and business opportunities with new authors, navigating the publishing world.

Did you always want to be an author? I don’t think that I would define my journey that way. I have always loved stories, both in hearing and the telling. My family has a rich storytelling history, and I spent many gatherings listening to bombastic tales from faraway places. My first written story was about a figurine on the end of my pencil who came to life and led me into an adventure filled with inch-high pirates. I have bought into the idea C. S. Lewis promoted by saying, “You can make anything by writing.” For as long as I can remember I have been called a dreamer, the context usually meant as a slight. I am learning to embrace my vivid imagination as a gift rather than a burden.

What is your most recent book and what inspired you to write it? I began writing Immigrant Patriot, knowing that my grandchildren needed to hear my 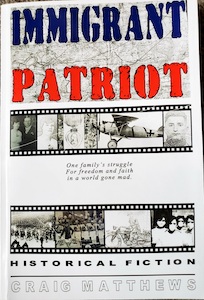 grandparents’ history. I was afraid as my family passed away their story would follow them to the grave. So I began interviews to capture as much of the verbal history as I could. During my research I discovered that I only knew a tenth of their story and felt compelled to bless others with their incredible tale of survival.

How do you hope your book uplifts those who read it? My grandfather crossed the Atlantic Ocean seven times before he was able to remain in this country. Wounded during the first World War he limped home into a pandemic. My grandmother was forced to immigrate to Utah by her parents when she was nine. Her beloved father died three weeks later from an ear infection. Both of them were challenged during those early years in ways that we can only dream of, I think we would call it a nightmare. From the outside one could draw the conclusion that their life was too hard, and those difficulties would taint their desire to be in America. But they would be wrong. Their story inspires me to do the hard things. To practice gratitude and reach for humility. To stand up for freedom and against injustice. To practice my faith in everyday life. I believe the tale will inspire you as well.

How do you handle setbacks and criticism? Difficulties surround all of us in this world, to one degree or another. I have spent many days on the mission field building homes for families that lived in cardboard boxes and drank filthy water. Remembering the poor in Ciudad Juarez, with the challenges they face, makes most of my difficulties shrivel into nothingness. Perspective is everything and I consider writing to be a privilege. People will disagree with me, but I choose whether or not to give them power over my inner life. It is important to reflect and weigh criticism, because we grow through pain and humility. Getting up after setbacks is one of the greatest life lessons we can learn. This is true because our natural inclination is to isolate and insulate against criticism. To close down. To lose hope. My faith in Christ inspires me to evaluate my life with sober intent and an eternal perspective. This introspection drives me to be a better version, but not a Craig 2.0, more like a Craig 21215.0.

Anything else you’d like to add? I am grateful for my grandparents’ influence which inspires me to press through life’s difficulties.

Path to Sunshine Cove
Take the First Shot: Strategies to Fire You Up and Change Your Life

About 49 minutes ago from Kimberly Monaghan's Twitter via Hootsuite Inc.