I was excited to connect with another Michigan resident, Lori Spielman who has launched a successful career both as an author and incredibly talented editor. But her skills don’t end there. Lori is a former speech pathologist, guidance counselor, and teacher of homebound students. Although she enjoys fitness running, traveling, and reading, writing is her true passion. Her first novel, The Life List, has been published in thirty countries and optioned by Fox 2000. Her second novel, Sweet Forgiveness, was also an international bestseller. Her third book, The Star-Crossed Sisters of Tuscany, was just released last November.

Though she is an avid traveler and spends quite a bit of time in Germany, Lori lives in Michigan with her husband and their very spoiled puppy. Lori is a gracious and thoughtful lady and was willing to tell her story to Books Uplift readers. I’m certain you’ll find her as engaging as I do.

You are an author, but is it your day job? First, thanks so much for hosting me today, Kimberly. Yes, I’ve been lucky enough to be a full-time writer since 2013, the year I stopped teaching.

Did you always want to be an author? I wish I could say I’ve always known I’d be a writer, but I was an adult before I dreamed of becoming an author. I grew up in a working-class family, the first of four siblings to attend a university. I never knew a single author. When I went off to college, my practical mother asked, “A teacher or a nurse, which would you prefer?” I got really crazy and became a speech pathologist! 🙂 But I have no regrets. I love the time I spent working in the public school system and I learned so much about life and love from my students.

What is your most recent book and what inspired you to write it? The Star-Crossed Sisters of Tuscany released November 17, 2020. It’s the story of a centuries-old curse on second-born daughters in the Fontana family, committing them to a life without 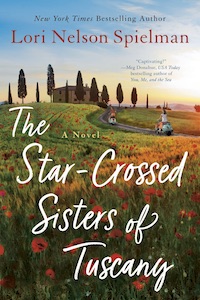 lasting love. Two second-born cousins have fallen prey to the family myth, that is, until their eccentric Aunt Poppy invites them to Italy, where she vows she’ll meet the love of her life at the Ravello Cathedral on her 80th birthday and break the curse, once and for all.

I wanted to write about a woman who was told from a very early age that she would never find love. To me, it seemed this revelation might result in one of two types of women: one desperate to prove the myth wrong, or one who found freedom and authenticity from this knowledge.

How do you hope your book uplifts those who read it? The Star-Crossed Sisters is basically a story of how we often live up—or down—to the expectations of others. I hope this story gives people courage and strength to overcome whatever expectations may have been placed on them, and live life fully and authentically.

What are you most excited about with this book? The Star-Crossed Sisters of Tuscany is my third book, and this one was chosen as a Book-of-the -Month Club November selection and an Indie Next Pick. I’m getting lots of positive feedback from readers, and I’m thrilled that it seems to be resonating with so many people. And it’s serendipitous that the book, set mostly in Italy, released at a time when folks are desperate to travel.

What advice would you give to someone wanting to succeed in your professional industry? Lots of people wish to write a book, and with independent publishing, there are plenty of options. But for someone hoping to be traditionally published, I’d suggest studying the craft if you’re serious about being a writer. I took six writing classes, read oodles of books on the craft of writing, attended many writing conferences and workshops, and wrote three complete novels before finally landing a book deal.

How do you handle setbacks and criticism? It’s heartbreaking, really, and it never gets easy. Writing is a solitary craft, and we writers pour our souls into our work, sometimes for months, or even years. Rejection in this industry is almost certain, and sadly, it’s something you must get used to. Believe me, I was the most thin-skinned person ever, but I’ve always been stubborn and tenacious, and those traits have served me well.

How do you hold yourself accountable and achieve the goals that you set forth? I try to structure my day, and carve out time without distractions to write, usually mid-morning until mid-afternoon. I generally like to write 1,000 words per day.

What do you find most fulfilling in the career that you’ve chosen? It’s absolutely thrilling to receive messages from readers letting me know that the book affected them in some way. That’s my entire goal while writing, to touch a reader’s emotions, and it’s so gratifying when it’s achieved.

What book uplifts you? Oh, wow, there are so many! To name a few, I just finished a gorgeous novel called The Vanishing Half by Brit Bennett. I find anything by Adriana Trigiani uplifting. I was also inspired by Untamed, a nonfiction book by Glennon Doyle.

Anything else you’d like to share with your readers? Just a huge thanks to anyone who reads my work. And extra thanks to those who leave reviews, drop a line, and support independent bookstores! You inspire me to write!

Get your copy of Lori’s new book and follow her social media feeds for upcoming events and books signings via her website.