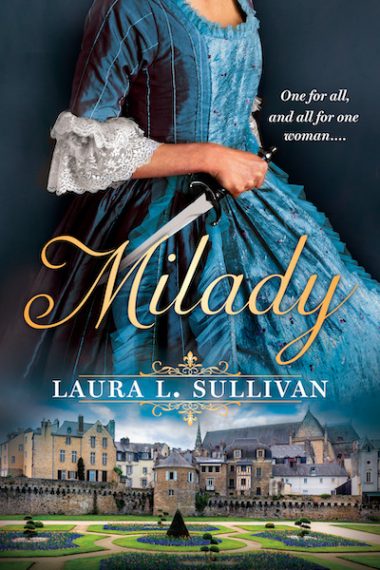 “One for all, and all for one woman.”

With its intriguing premise, this is a book I immediately snatched off the shelves. Who would have thought it would be a woman who would best the musketeers and become the most revered and feared woman in all of France?

Lady Clarice’s story begins in 1615, growing up on her father’s country estate in Yorkshire. Raised solely by her Maman, she’s sheltered but not unschooled. Rather it is her mother’s desire to see Clarice well-educated and armed, not only with knowledge of the healing arts but skilled in the use of weaponry. For it is her mother’s experience with her conniving and philandering husband which propelled her to ensure her daughter’s survival. When young Clarice becomes a pawn for her father’s political gain, she receives a chilling lesson on trust and survival from whence she goes on to become a spy, a seductress and heroine known as Milady de Winter.

A lady spy in 17th century France who’s cunning enough to take on the French court and the Three Musketeers. This is young adult author Laura L. Sullivan’s breakout adult book. And boy what a hit it is. I adore a book that is able to delicately weave education and entertainment. I learned more about this era than I had expected and from a woman’s point of view it is hardly as romantic as many books suggest. Though I am probably doing Milady a bit of injustice with my airy description, let me hit you with a more robust review of some highlights that you can expect.

First there is no doubt that Sullivan did her research. Her detailed historical descriptions of settings, figures and events clearly shines through. In such, you’re transported back to a time when women were cast in shadows of men and had very little opportunity to step outside these parameters. Religion also plays a character in this novel as strict beliefs and decrees governed as much as the royal hierarchy.

Sullivan opens up a colorful world and invites you on a wild ride alongside an incredibly unique and gutsy heroine; and despite the harsh cruelties she faces and the questionable decisions she’s forced to make, you cheer for her survival and the powerful mark she leaves on her nation.