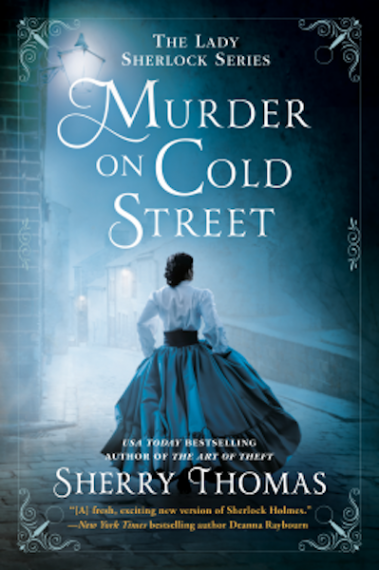 Here’s an interesting take on a Victorian murder mystery—Sherlock Holmes is a “she.”

Charlotte Holmes is the sister of the infamous “Sherlock” and only a few are aware of her true identity and unique abilities to solve mysteries in his name. As many women were forced to do, Charlotte has adopted a non-assuming identity all the while serving as the true legend behind the lore.

When her friend, Inspector Treadles, is accused of homicide, Mrs. Treadles rushes to 18 Upper Baker Street to enlist Sherlock Holmes’ help in proving her husband’s innocence. There she is met by Holmes’ “sister” who not only provides the calming presence and much needed ear, but assures her that her brother, recuperating in his private quarters, will take the case. Thanks to the modern technology in Watson’s home, where they currently reside, “Sherlock’ is just beyond the door listening and watching via a camera obscura, ready to work on Inspector Treadles behalf. This ruse is supported by Holmes’ dear friend, and trustworthy collaborator, Lord Ingram who also has a growing fondness for Charlotte. And when Mrs. Treadles unravels the full travesty of justice poured out upon her husband, coupled with the possibly related lack of respect she’s received as a woman of business, Holmes agrees to take the case.

This delightful take on a classic character by Sherry Thomas is not only a thoroughly enjoyable read, but a timely story with a provoking message.

The limitations placed on women throughout history is clearly broached by not two, but three women—including Watson—forming the intellectual prowess needed to solve the case. The character of Charlotte Holmes is incredibly dimensional with her quirky behaviors (a nod to her iconic ‘brother’) and her deep introspective musings. She doesn’t let bias intercede as she uses sound logic to resolve the case while struggling to find justice in a partisan culture. It’s clear to this reader that Thomas has done her homework and has a strong grasp and narrative distinctive of the era. Sprinkle in a dash of science, romance and good old-fashioned gumshoe sleuthing and this is an entertaining novel for all mystery lovers.