The Break Down
By Kimberly Monaghan on April 5, 2020 in Books 4 Fun, Books 4 Thrills 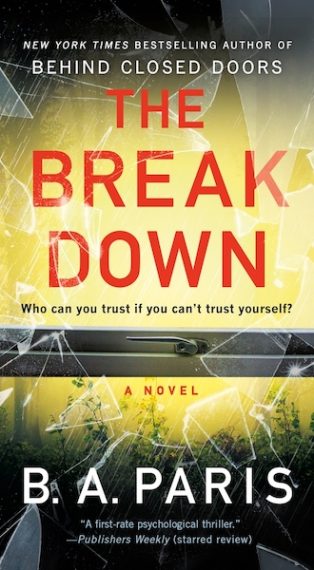 This book poses the question: If you saw someone stranded on a dark and desolate road amidst a terrible storm, would you stop to help?

A fearful Cass makes the decision not to. And when she’s discovered the woman that she’d passed was found murdered, she’s ravaged with guilt. That’s not the only thing tearing her apart from the inside out. She’s recently lost her mother who had early onset dementia and now Cass believes she’s following suit. So many things in her life have been upturned and she’s forgetting numerous conversations, promises and obligations. Coupling this with her strangling guilt about the woman’s murder and when strange phone calls and the fear that she’s been watched in her own home start happening, Cass is unable to cope.

Scared and uncertain, she willingly attends doctor’s visits that her husband Mathew’s arranged. The pills the doctor prescribes seem to help, but also send Cass into a drowsy fog. This is exactly what she craves as she’s terrified of being alone in her house without her husband or best friend Rachel to assuage her fears. That is until one day when she discovers a tangible clue that no one, including the police, can chalk up to only in her imagination. This is a pivotal moment when Cass realizes that her fate is not pre-determined. The shocking discovery changes the reader’s frustrating cry for Cass to wake up to applauding her courageously risking everything to uncover the truth.

This book by B.A. Paris is simultaneously intriguing and disturbing, topped with a healthy dose of awesome.

Whenever a story is so close to a realistic scenario it’s even more disturbing than that of the fantasy kind. The question posed at the beginning truly haunted me and I asked several people how they would handle this scenario and what would happen if they chose “no” with the same outcomes. It makes you think twice about how a small seemingly innocuous decision can change the fate of so many. But this is a suspense with an unknown ending and an adventurous ride along the way. And holy cow, just when you think you’ve got this crazy rollercoaster figured out, Paris throws you a curveball you didn’t see coming.