The Desert’s Share
By Kimberly Monaghan on September 25, 2020 in Books 4 Fun, Books 4 Thrills 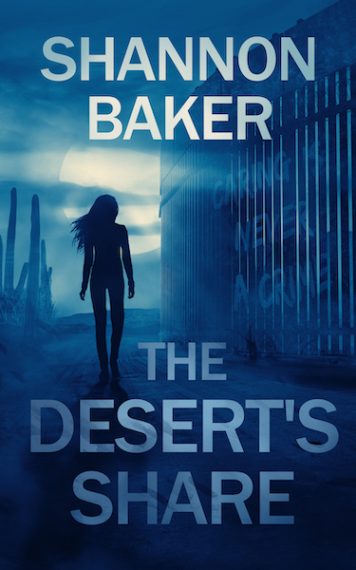 The setting for Shannon Baker’s suspense The Desert’s Share is  unbelievably unique and timely. It’s set on the Arizona border with the lead character, Michaela Sanchez, a former law enforcement officer now newly minted border patrol agent trying to build a career she believes in while managing a rebellious family challenging her at every turn. Commissioned to apprehend smugglers outside of Tucson, Michaela finds herself facing a bigger battle between the vigilantes Recon to Reclaim the Desert and the No Desert Deaths, a human rights organization that her sister, Ann is covertly supporting by using her refugee center as an underground railroad for illegal immigrants. Michaela’s also being trained by a bitter, seasoned border agent who seems to be cavorting with a rogue self-proclaimed patriot who is hell bent on stopping the migration of illegal aliens.

Michaela’s first day is a disaster. Her eldest daughter has skipped school to protest the “inhumane acts” of the border agents, including her own mother. And then on her first independent recon, Michaela finds Lacy, the missing human rights advocate who’s been leading the cause against closing the border. Worst of all, Lacy is dead, and all indications point to the organization Michaela’s sister works for. Intent on proving Lacy’s murder is not tied to the agency and desperate to save her sister and daughter from the same kind of fate, Michaela risks it all to prove her instincts right.

Perhaps there are other novels set against this backdrop, but I’ve yet to find one, nor find one that drew me in so rapidly.

Right from the get-go, I felt for Michaela, wanting her to be successful in her new career and prove her agency isn’t entirely heartless. And at the same time, I was so frustrated that her daughter wasn’t able to see how hard she was working to make things better in her own way. How much Michaela was sacrificing for her family and, in the process, unintentionally building her own private wall between them. In contrast, her daughters, sister and husband have their own valid perspective and believe that perhaps Michaela is taking the job too seriously and putting her career over what really matters.

This is a gripping and suspenseful story and I can’t wait to see what’s next from Shannon Baker.

Purpose, Passion and Pajamas: How to Transform Your Life, Embrace the Human Connection, and Lead with Meaning
Practicing Normal