The Plaza: The Secret Life of America’s Most Famous Hotel
By Kimberly Monaghan on May 11, 2020 in Books 4 Fun 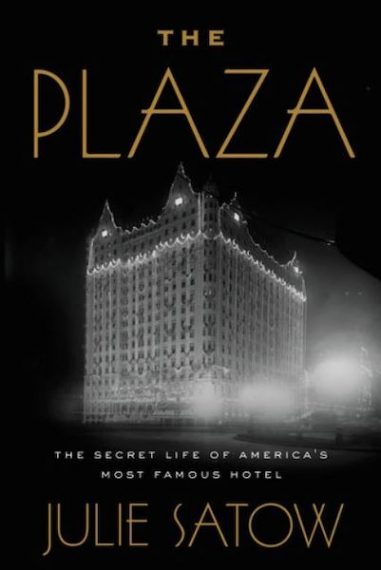 The history behind this iconic hotel is illustriously detailed in this new riveting book by Julie Satow. From the very first opening of the original Plaza in 1890 to its reconstruction in 1907 and onto its modern day debut led by the Qatar Investment Authority. The Plaza’s exchanged hands so many times, it’s hard to count; and with each rebirth, renewal and revitalization, this landmark of New York brims with exciting exploits and colorful events.

This book introduces the Plaza’s story all the way back to when it was just a concept, and it breathes life into the landmark making it the star of its very own tale.

It’s a transgression to consider the Plaza simply a notable hotel. Rather, it’s the haunting setting for such dark events as bloodthirsty union battles, segregation and discrimination, apparitions, bomb scares, strikes and even suicides. On the flipside, the Plaza played host to Alfred Gwynne Vanderbilt (the first registered guest), Truman Capote’s infamous Black and White ball, Eloise’s mischievous romps and a non-stop stream of bluebloods, society, Hollywood and international royalty.

I couldn’t wait to get my hands on this book that was graciously sent to me by Twelve Books Publishing. The cover alone is captivating but from the very first page I found myself enraptured in the stories that revolved around and within the Plaza’s magnificent walls.

I’m not from New York, but you don’t need to be connected to the city’s rich history to appreciate the Plaza Hotel and this book by Julie Satow.

She’s captured so many of the vibrant stories and shared biographical stories that no doubt took years to collect. Like an architect, she unearths for you the Plaza’s intimate history and presents such an intricate timeline that it makes you feel as if you’ve lived each moment basking under diffused light in a comfortable corner of the Palm Court.

About 16 hours ago from KimberlyCharleston's Twitter via Hootsuite Inc.

Looking for a great book to read and share at your next book club. Here’s how to get started: ow.ly/Dssu50wAwVN #reading #books #librarylife #readingisfundamental #amwriting #happiness #booklovers #readingcommunity pic.twitter.com/IfTGJpKxoO

Re-reading a book or an article or even a quote or mantra is a great way to find inspiration when you need it most. ow.ly/j3EG50CaGjl #Bookworms #librarylife #readers #books #chicklit #reading pic.twitter.com/kFzPujZou6

About 2 days ago from KimberlyCharleston's Twitter via Hootsuite Inc.

About 2 days ago from KimberlyCharleston's Twitter via Hootsuite Inc.