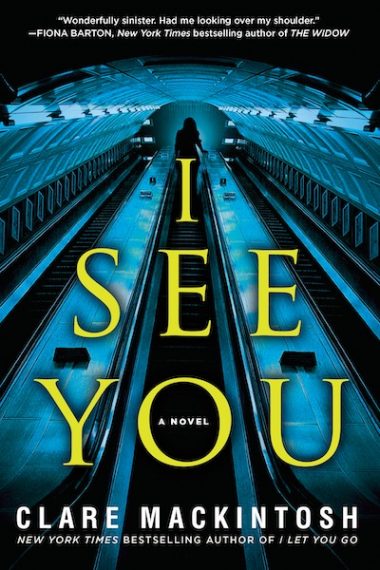 Technology brings a whole new kind of crime—the ability to track someone’s every move and market them as commodities on the Internet.

When Zoe Walker discovers her picture in a classified ad, she can’t shake the feeling that someone on her commute is behind it. And when more women’s photos appear each day and they’re victims of increasingly violent crimes, Zoe’s terrified she may be next. After reaching out to local authorities only to have her concerns dismissed, she finally connects with a beat cop who believes she may be on to something. But both women must face their own fears and demons to discover who is behind these ads and how to stop this rein of terror before it’s too late.

I See You by Clare Mackintosh is the unsuspecting kind of mystery that creeps up on you when you least expect it. And when it does, it’s terrifying.

What you have here is a suspense-filled tale that is so probable that you not only wonder if it was based on true events, but shudder to think about the likelihood that this could happen to you. But what makes this story even more disturbing, and simultaneously a thrilling read, is how increasingly close to Zoe’s inner circle the suspects become. They soon discover that someone is the puppeteer behind a website that shares the details of women’s daily commutes and offers them up as predator’s bait.

Who could imagine such an unthinkable act? Unfortunately, all too often revenge, desire, control and money are the driving motivators behind similar crimes and technology makes them easy to commit. Mackintosh’s clever story-telling combined with the eerie realism of this cyber-based crime makes this book a must read.

Fiction Friends Versus Fictional Friends
The Power of Books

About 49 minutes ago from Kimberly Monaghan's Twitter via Hootsuite Inc.