Author Q&A with B. A. Williamson
By Kimberly Monaghan on February 4, 2021 in Author Q&A, Book Talk 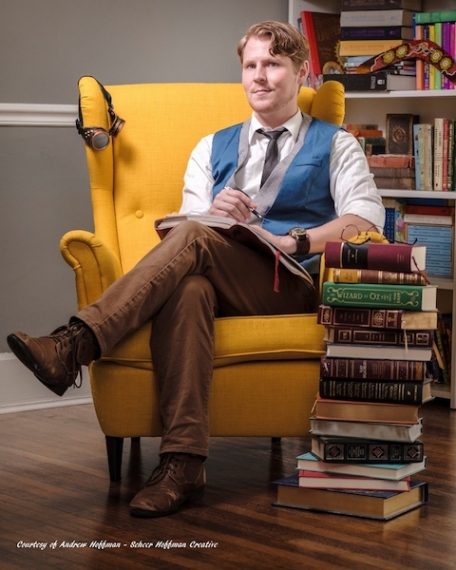 By Kimberly Monaghan on February 4, 2021 in Author Q&A, Book Talk

I was first introduced to B. A. when I came across the enchanting image on the cover of his book Fantastical Exploits of Gwendolyn Gray. I just had to meet the author. And though he’s a fairly new acquaintance, B. A. will definitely leave a lasting impression. His incredible books, wit and altruistic approach to life will no doubt impress and inspire.

He describes himself as the overly caffeinated writer of The Marvelous Adventures of Gwendolyn Gray. When not doing battle with the demons in the typewriter, he can be found wandering Indianapolis with his family, singing in a tuxedo, or taming middle-schoolers. He is a recipient of the Eli Lilly Teacher Creativity Fellowship. And he has graciously carved out time from all of these adventures to share more about his journey. Oh, yeah. He also asked readers to “Please direct all complaints and your darkest secrets to @BAWrites on social media or visit gwendolyngray.com.”

You are an author, but is it your day job? I try to do as many different things as possible, to generate new ideas. I teach middle-school English, I run a children’s theatre program, and I have a singing gig on the side at an interactive museum. I don’t think I could be a full-time author. These other jobs provide me with rich experiences and interesting people to meet. Most particularly, working with children helps me keep my characters realistic and relatable.

Did you always want to be an author? Not at all. Being a “writer” was never on the horizon for me. I was always more of a performer. When I suddenly decided, “hey, I want to write a book,” it came completely out of the blue. Later, I looked back and realized I had spent most of my life writing in some form or another, from superhero stories as a kid, to notebooks full of bad poetry in high school, to journals of 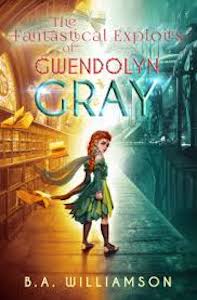 random musings in college. I wrote a comic script, just for the fun of it, as well as a musical. But I never took creative writing classes or joined poetry clubs. I wasn’t a Writer. I was just a guy with too many ideas, and I had to jot them down somewhere. So, it was a bit of a shock to realize that I had been a writer all along and had developed most of the tools I needed to do a decent job

What is your most recent book and what inspired you to write it? The Fantastical Exploits of Gwendolyn Gray, which is the second book in the Chronicles of Gwendolyn Gray, came out in April. My first manuscript was far too long, and I had to split it in two. The sequel finishes my original vision for the story. But I also wanted to paint a realistic picture of mental illness in middle-school age children, particularly anxiety, depression, and bipolar disorder. I have bipolar disorder myself, so that topic is quite important to me, and I see how much kids struggle as they go through the most difficult years that most of them will have.

How do you hope your book uplifts those who read it? I hope kids are able to see themselves, and to see their own struggles, taken seriously. When you’re twelve, things that seem like the end-of-the-world can be trivialized by adults. But to that kid, it still feels like the end-of-the-world. So, characters who are dealing with actual life and death situations, but with the same emotions and struggles as the readers.

What are you most excited about with this book? Faeries. Magic. Monsters. Airships. Epic climactic battles. Throwing a lot of my favorite stuff into one story. But also, the chance to address mental health issues for an age group that doesn’t often get to see it discussed.

How did writing a book help your career take off? Well, if I didn’t have a book to sell, I wouldn’t have much of a career! (Touché, B.A.!)

What advice would you give to someone wanting to succeed in your professional industry? Don’t try to succeed in publishing. It’s commercializing and intimidating, which is not great for creativity. Focus on honing your craft. Improve your skills. And write a story you can be proud of.

How do you handle setbacks and criticism? When I know I’ve done the best job I can absolutely do, when I’m confident that it’s truly good, it functions as a sort of armor. I’m a rare breed of author, and I’m going to get rotten fruit thrown at me for saying this, but I love reading my reviews. People have a tendency to focus on the bad ones (I can quote some of my own bad reviews from memory), but I also have some glowing ones that I’ve bookmarked for when I’m feeling down on myself. Negative reviews fall into four categories for me.

How do you hold yourself accountable and achieve the goals that you set forth? I don’t! Seriously, I’m terrible with accountability. I write when I have something to say—sometimes I can force my way through, but that rarely ends up being any good, unless my outline is really solid. One of the best ways is to make time to be bored. Boredom is crucial. That’s when we think and ponder and wonder, and the story comes together in your head. My most insurmountable story problems are rarely solved at the keyboard—they’re solved on long walks, or car rides, or standing in line at the grocery. I have to turn off the audiobooks and the podcasts and the video games and let my mind wander. Then I usually end up with things I just have to write down before I forget them. When all else fails, I do force myself to write three sentences each day. It’s a low bar to clear—even on my worst day, I can write three sentences. And it’s not much to delete if I decide it’s terrible later. But the funny thing is, I have rarely stopped at three.

How do you structure your day and make time for writing? I try to get up and write before the kids are awake. We recently had our second child, and that’s disrupted my schedule a bit, so I’m writing in whatever spare moments I can grab.

What do you find most fulfilling in the career that you’ve chosen? I love seeing the magic that happens when reader meets text. It’s thrilling to hear which parts they loved, which characters they liked, especially when they bring up things I would never expect. Storytelling is an interactive experience—it’s personal and unique, and it’s fascinating to see how people view the story through their own lens. Sometimes they will see ideas and messages that I never intended, but that doesn’t make them any less real.

What book uplifts you? The Little Prince. The themes of growing up but never forgetting your childlike sense of wonder always ring true with me, and there are few things I love more than a bittersweet ending. Happy endings always feel hollow to me. I don’t know where the quote comes from, but I firmly believe it: “happy endings are for suckers.” Maybe I’m just a cynic. But reaching the end of a good book is a bittersweet experience in itself, as you say goodbye to characters you love, and The Little Prince does it wonderfully.

Anything else you’d like to share with your readers? Shameless plug—go read Gwendolyn Gray and email me what you thought. I could talk about my little girl all day.

You can connect with B. A. Williamson and get copies of Gwendolyn Gray’s adventures on his website.

Images Courtesy of B. A. Williamson