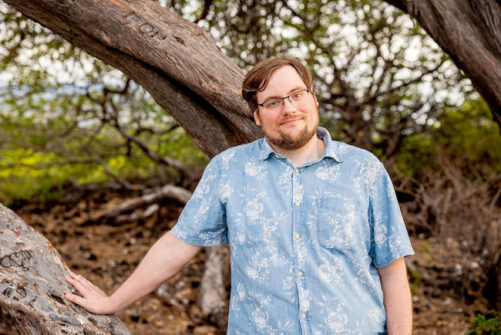 After first winning a writing contest at age six, Matthew Donald made it his lifelong goal to write a bunch of books and release them upon the world. He graduated from the University of Northern Colorado in 2014 with a B.A. in English and Creative Writing, and he has published three sequels to Megazoic among some other projects. Teslanauts is his first steampunk, fantasy book and he is working on sequels. He lives in Centennial, Colorado with his cockatiel, Lyra.

You are an author, but is it your day job? It’s definitely not my day job. I also work at a coffee shop, record and promote my podcasts and Patreon, and when I’m home, hang out with my girlfriend and play video games. If I made slightly more money, I’d be living the dream! Alas, money is a thing.

Did you always want to be an author? Absolutely. I wrote a poem at age six explaining how great it would be if I were an author, and in a great bit of foreshadowing of things to come, that poem won a writing contest at my school. I’ve always been super creative and a lover of stories, and that has kept up even as my life has gotten progressively busier.

What is your most recent book and what inspired you to write it? I have a book coming out August 16th, 2022 called Teslanauts, and it’s a historically-based sci-fi that takes place in the 1920s and deals with Nikola Tesla’s crazy inventions. In this story he has a secret organization of agents with advanced technology aiding the world in the shadows, including from hostile countries or factions that want to use similar technology for more destructive purposes. I’ve always liked Nikola Tesla and the idea of his technology being real back then has always been intriguing, but I wanted to tell a different type of story with it than some others have. While the story is technically alternate history, it’s treating these events as a hidden part of history, and there are very few deviations from actual historical events. It just also happens to have lightning guns and mechs.

How do you hope your book uplifts those who read it? Part of the book’s 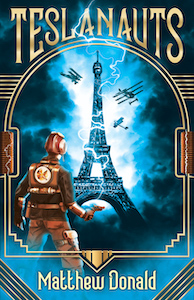 message, explored by the main character Raymond, the main antagonist, and Nikola Tesla himself, is that we’re not defined by where we come from, but by what we do. In an era of constant discrimination and hatred of others just due to their backgrounds, this can be a very enlightening message, in that ultimately history will judge what you did more so than where you’re from. Also, in terms of uplifting in less deep ways, the book is also quite a bit of fun and a rollicking adventure romp, and that’s always nice.

What are you most excited about with this book? I’m excited to see how people respond to a book of mine that is beyond my usual type of writing. I’ve always loved dinosaurs. All my friends know it, all my coworkers know it, and anyone who’s read my previous book series Megazoic knows it. Therefore, I can’t wait to show people this book Teslanauts, a book that has nothing whatsoever to do with dinosaurs, and show people that I’m more than that. I can write a good story about anything.

How did writing a book help your career take off? It got me a lot of attention from various outlets. I’ve talked at schools and other educational venues, I’ve done book signings at conventions, and I’ve gotten my book on the shelves of several related venues. My Megazoic books for instance continue to sell well at Dinosaur Ridge, a local site with vested interest in the subject matter. It’s also gotten my podcasts more attention, which in turn gets my Patreon more attention, which means I’m closer and closer to actually making a living off of creative ventures alone. Please subscribe to my Patreon! Patreon.com/MatthewDonald! Haha.

What advice would you give to someone wanting to succeed in your professional industry?  It’s not easy, it’s not cheap, and it’s not fast. Anything you might think to be an overnight success usually is anything but if you go into the creators’ backgrounds. You’ll want to give up, and you’ll want to repeatedly give up, but you gotta plow onward. There’s no guarantee you’ll be rich from writing or podcasting no matter how hard you work, but there is a guarantee that you’ll find zero success if you give up. Basically, don’t give up.

How do you handle setbacks and criticism? First I privately get angry and throw darts at a picture of the critic’s face, then I think I’m a failure, have a big cry, then throw darts at a picture of my own face. After this emotional roller coaster, which can last anywhere from a few days to sometimes just an hour, I calm down, realize they don’t mean any of it personally, assess their criticisms, learn from them if they’re constructive criticisms, and ignore them if they’re destructive and cruel. Basically, I react like a normal human being. That’s how normal humans react, right?

Being an author today is like running a business. How do you manage all your publicity, social media and keep your engagement up with readers? I’ve been bad about it recently, but I used to schedule social media posts every day with a theme for each day of the week. I need to do that again. I have gotten fan mail and have responded accordingly each time, which is nice. Readers need that kind of personal connection.

How do you hold yourself accountable and achieve the goals that you set forth? It can be difficult with the multitude of distractions available to us thanks to the Internet, but what I try to do is go to my local coffee shop with my old laptop that’s unable to play any games and then just sit down and write. Sometimes I get to work a few hours early so I have to write in order to keep myself occupied before I clock in. Basically, I try my best to have a good work ethic and get stuff done.

How do you structure your day and make time for writing? I usually have set times for when I write, either just before work or sometime in the mid afternoon on my days off. I’m really bad about correcting my schedule if anything goes awry, though. If for whatever reason I don’t go to the coffee shop to write by 4pm, I’m just not going there at all that day, and I have no clue why. Maybe my work ethic is not so great after all.

What do you find most fulfilling in the career that you’ve chosen? Having a story or idea that comes out of my own brain and putting it down onto the page. Some of my best ideas I have planned for years before I get to the point of writing them down, and when I do it’s so satisfying. Also, hearing from fans is also nice. I got an email last year from a mother that said their young son LOVES my books and wanted signed copies of the latter two, and I think about that all the time. Of course I gave him those signed copies. Hopefully he still has them.

What book uplifts you? A joke book. Or a good fantasy book with a world and characters I can get sucked into. Or a fun romance. A lot of things, really. I in particular really like the works of T.A. Barron. His love of the natural world and his fantastical ideas are always so inspiring.

Anything else you’d like to share with your readers? Writing is exhausting, tiresome, and sometimes the bane of your existence, but it’s also incredibly fun, creatively rewarding, and very intellectually stimulating. Plus you get to show people the crazy ideas you’ve concocted in those overworked neurons of yours, and that can always be fun. I’ve had some people I know read my books and say to me later “I had no idea your mind was like this.How the heck do you come up with this stuff?” And that, more than anything, is what makes this gig worth it. Money would be nice, fame would be fun, but just having your stories out there for people to enjoy is good enough for me.

You can learn more about Matthew, his book and connect with him on his website.