Beneath A Scarlett Sky
By Kimberly Monaghan on October 1, 2019 in Books 4 Fun 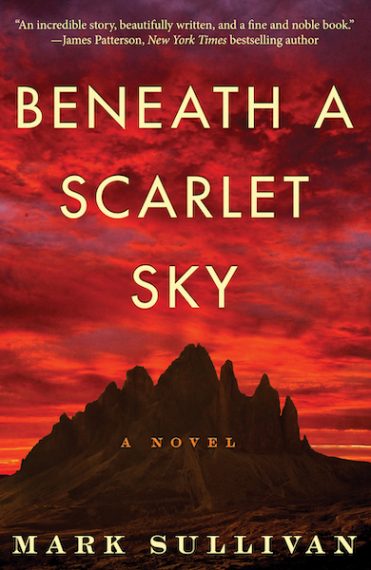 Set in the year 1943, this book by author Mark Sullivan tells the tales of victims and survivors of the Nazi invasion of Italy during World War Two. While it is a work of fiction, the book is based on facts and is told from the perspective of a true war hero, Pino Lella.

Seventeen-year-old Pino Lella is trying to live a normal teenager’s life in Fascist Italy. His mind is preoccupied with “food, music and love,” or rather adventures with his friends and meeting girls. When he sees Anna-Marta, he is struck by her beauty and invites her to meet him at the movies that evening. She doesn’t show up. But that’s the least of his worries. That very night, Pino’s life changes forever beginning with him surviving the bombing of the theater and he is forced to grow up and face the harsh realities of war, too soon.

This begins when he is sent by his parents to live in a monastery, Casa Alpina. Being the oldest of the boys there, Father Re tasks him with a rigorous schedule of training and schooling. In time, the father shares with him the reason behind this grueling and physically challenging routine of climbing the alps unseen—he is to lead Jewish refugees out of Italy and to freedom.

In time, Pino’s father calls him back to Milan where his parents have decided he should enlist in the German army, hoping he will be safe and out of harm’s way. Despite his protests, and especially after the horrors he’s witnessed by the Nazis and the fearful plights of the travelers he’s helped, he obeys. His skills combined with a lucky break pull him from the front and into the role as driver for a very high ranking Nazi General Llyers. Pino’s family who are doing whatever they can to aid the Allies, see this as a golden opportunity for Pino to help and act as a spy. And despite the fact that this ‘opportunity’ lands him smack in the middle of the horrors of war, it does bring him full circle back to his first love, Anna-Marta.

The story spans almost two years from the night of the bombing to the end of the war, and in this short time, Pino has grown from a child into a man and has seen, accomplished and lived more than nine lives. While always being thrust into a daunting, soul-searching and more often than not, horrific situation, Pino is sheltered from the bigger picture in which he plays an integral part.

I just want to say read this book because there is so much in this story that I can’t capture it here. But I will tell you what I love about it. When I started reading it, I quickly fell in love with the protagonist and got swept up in his journey, the historical perspective, not to mention the author’s uncanny ability to take the reader to a uniquely woven period with perspective.

This is also not a read for the faint of heart. I don’t want to brush by the author’s account of the war shared through the Italian people’s viewpoint as they faced and they valiantly fought against the brutality of this war. When Pino witnesses the execution of his friend—and other beloved people in his life (no spoiler alert here)—I literally cried; especially when after seeing his friend slain, the General Llyers confronted him afterward challenging his loyalty to the Nazi party.

The author holds none of Pino’s memories back and gives literary illumination to this little-told perspective of the war, including the disturbing reality conjured up as thousands were carted off to what they believe was a work camp but in reality was Auschwitz.

“That night and for many nights afterward, Pino’s dreams were haunted by the red train and Platform 21. He kept hearing the woman beg him to pray for her. He kept seeing those poor little fingers wiggling at him and dreamed that they belonged to a child of a thousand faces, a child who could not be saved.”

The inspiration for Pino’s story can be found in the Preface and is not to be missed as it shares how Sullivan turned four years of his life over to building a relationship with the real Pino Lella and traveling to Italy, Germany and around the United States interviewing experts, survivors and families tragically connected to the Italians’ experience during World War Two. The laborious research and writing that went into this book are evident, and it is clear that this story is not only the tale of a war hero that deserves to be told, but a glimpse into the author’s soul.