Confessions of a Wild Child
By Kimberly Monaghan on October 6, 2019 in Books 4 Fun 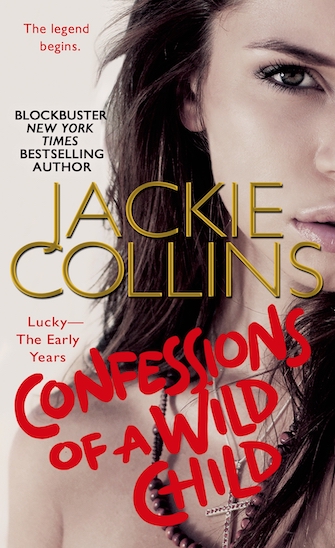 So you’re traveling, charging your e-reader when a book in the airport store catches your eye. That’s how I met Jackie Collins’ Confessions of a Wild Child. Oh sure. Who hasn’t heard of Jackie Collins, the best-selling, Beverly Hills author who’s been writing scandalous novels often based on the rich and famous in the same social circles she circulates in? But honestly, I’ve never read one of her books until now.

And I have to admit it only took me two hours, because I was hooked.

This novel tells the story Lucky Saint, a fifteen-year-old beautiful, rebellious, rich girl who dreams of taking over her father’s status as one of the biggest Vegas hotel moguls. Despite his notorious past and womanizing reputation, daddy Gino Santangelo will do whatever he can to rein in his wild child daughter and turn her into the proper young lady she should be; this includes shipping her off to one private school after another and arranging for her to marry a Senator’s son. But Lucky has plans for a bigger and better life as a powerful woman in charge of her own empire. And what her father doesn’t know is that Lucky is already a woman of the world who’s experienced “almost” everything on her way to prove she’s mature enough to be the hotel heir, despite the fact that she is “just a girl.”

It’s an intriguing read and rollercoaster ride on this teenager’s evolution. Just pick up any tabloid and it’s not a stretch of the imagination to believe that this story is modeled after a celebrity or two. Simply put: it’s fun. There are moments where you empathize with the little girl who found her dead mother floating in the pool. You also experience frustration with her rebelliously thrusting herself into one precarious situation after another. And of course there’s her love-hate-lust relationship with her dad’s right-hand man, Mario. But who doesn’t remember being a teenager? Maybe not all of us had private jets and a house in Bel Air, but we can certainly identify with her youthful curiosity and courage.

While I haven’t heard of this character before this chance encounter, I now want to know the rest of Lucky’s story and how she evolved into the “super-heroine of seven books and three miniseries.”

Beneath A Scarlett Sky
Ghosted

About 18 minutes ago from Kimberly Monaghan's Twitter via Hootsuite Inc.