Burn You Twice
By Kimberly Monaghan on January 25, 2021 in Books 4 Fun, Books 4 Thrills 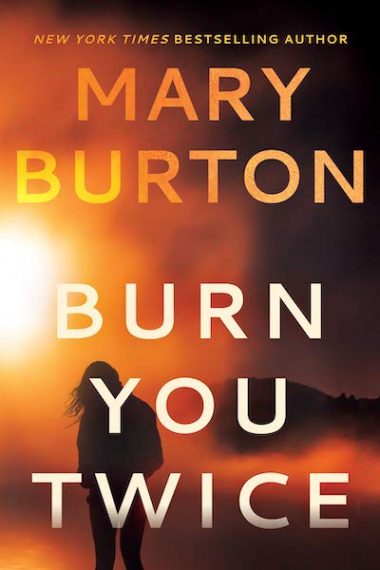 Detective Joan Mason returns to her Montana hometown after she jumped the gun on an arson case and was assigned desk duty. Accepting defeat, then going back isn’t easy, but she’s desperate for the company of her best friend Ann, and is determined to face head on the demons of her past.

This includes confronting Elijah, recently released from serving his sentence for setting fire to Joan and Ann’s college house which almost resulted in their deaths. Ann and her college boyfriend turned local detective Gideon Bailey are astonished to learn that Joan has been corresponding with Elijah while he was in prison.

But Joan has a motive. She wants to keep one step ahead of him. And she also wonders if he was truly responsible for the College Fire.

Still hurt by Joan’s sudden disappearance ten years ago, Gideon is reluctant to admit he’s glad she’s back. A widower with a young son, he is wary of letting Joan back into his life, but the pull is too great. And when she inserts herself into the recent string of arson fires and a murder that he’s investigating, he gives in. Working together they find answers to the perplexing and all-too-familiar fires as well as the unanswered questions that linger from their past.

Mary Burton is a talented author and this romantic suspense is proof. Great characters coupled with an interesting setting and complex plot. The arson gives the reader a peak into the malicious psychological makeup of someone who needs this type of release. The desire for power and control exhibited by several of the characters makes you wonder who exactly is behind the fires resulting from such a violent display of anger.

The opportunity that presents itself for Joan—and Ann—to find closure also opens up the door to other deeply held secrets the two friends hadn’t shared. This precarious exploration heightens the suspense and makes you question their motives as well.

I’m certain you’ll become a Burton fan if you like suspense and are looking for a read that is both complex and exciting.