Comeback Careers: Rethink, Refresh, Reinvent Your Success at 40, 50, and Beyond
By Kimberly Monaghan on April 18, 2022 in Books 4 Success 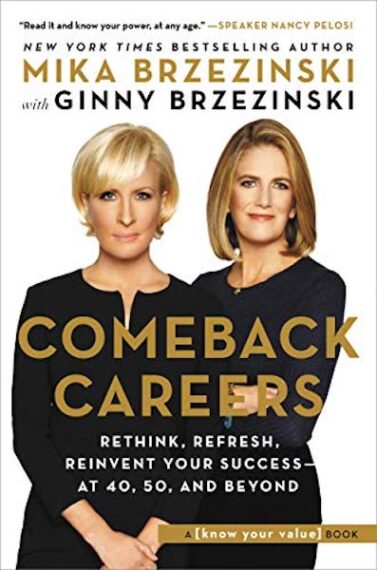 Simply put, this is a must-read manual for anyone thinking about coming back into their career after stepping out for a while. But it’s not just a strategy for career gaps. It’s also a guide for those who want something new, thinking about entrepreneurship, poised to make their dream career a reality or stepping into an encore career.

The bestselling book is written by women, two icons in the women’s career-success and motivational industry—Mika Brzezinksi, broadcast journalist and co-host of MSNBC’s Morning Joe and her sister-in-law and former Capitol Hill press secretary, Ginny Brzezinksi. And it’s written for women, but it speaks to a wider audience.

The book was birthed on the notion that many women struggle to reinvent themselves after motherhood, or after a major career setback or a transition of any kind that has perhaps taken them off their path.

While most references are cases of highly successful and accomplished professional women, many with a “celebrity resume,” it’s interesting how the authors have captured their vulnerability in their own career struggles. But don’t fret, the strategies and resources are designed for everyone. This includes sound advice from expert coaches and mentors they’ve had along the way.

If I had to sum it up in a sentence—Comeback Careers is an artful combination of motivational stories, real-world examples of career turnarounds and a handbook on how to successfully realize the next career journey.

The Miracle Morning
The War Widow