Confederates In The Attic: Dispatches from the Unfinished Civil War
By Kimberly Monaghan on March 1, 2019 in Books 4 Fun 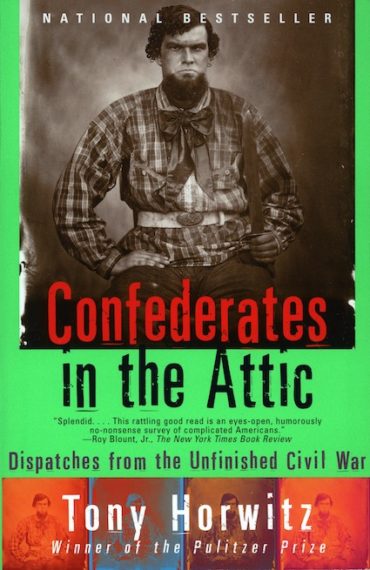 Award-winning journalist, Tony Horowitz returns home after nine years abroad to his relaxing farmhouse he sites as his respite in the foothills of the Blue Ridge Mountains. Awoken by gunfire, an unexpected but startling familiar sound from his work overseas, he discovers that his new home is the site of a civil war reenactment. A history buff, Horowitz was familiar with the mock battles but does not fully come to understand those who have pledged their lived to the 1800s until he teams up for a night with the “Southern Guard.” These “Hardcores” are obsessed with maintaining strict authenticity, only permitting period clothing, artillery and diet, including such delicacies as hard tack and salt pork. Stirred by the compassion surrounding him, not to mention the writer within, Horowitz commits to spend a year at war “searching out the places and people who kept the memory of the conflict alive.”

Horowitz’s journey delves deep into the underbelly of the South carrying the reader with him as he journals his experiences with an unbiased pen and witty prose. Disbelief and humor mingled with horror describe the emotional reaction to the colorful characters and experiences he encounters on his journey. In meetings with the Sons of the Confederate Veterans or the members of the Klu Klux Klan, his interviews put faces to the grim and startling history of the era.

There are no limitations to the author’s inquisitiveness; at each turn or roadside stop he finds a tour guide, develops a companion, or elicits an invitation. The fact that he lives in the state of Virginia seems to give him the accepted credentials to move freely in some Southern circles and it’s his affable personality and perhaps journalistic savvy that draws others to him. There is very little bias in his narrative, allowing the readers and individuals he encounters to paint their own picture and evoke their own emotional reactions.

From the vegetarian member of the Council of Conservative Citizens who doesn’t trust “federally inspected meat” to the Children of the Confederacy who believe there is nothing more fearful than a “Yankee,” the book is filled with antiquated fundamentalism contrasted severely with present day reality. Through the historic homes of Charleston and Vicksburg to the blood-scarred fields of Manassas and Gettysburg, Horowitz breaks down the romantic ideologies of war and uncovers the drama of those hoping to “find real answers, to read between the lines in the history books and share their experiences.”