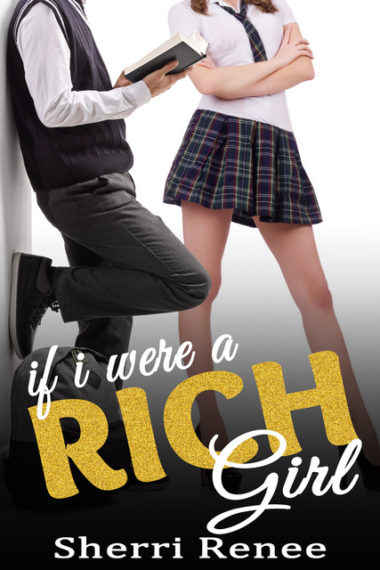 Miranda Amberly is starting over at a new school once again. This time, thanks to the benevolence of one of the town’s most prominent grand dams, “Rindi” begins her senior year at the exclusive Stratmore Academy. Though her parents are Mrs. Grayson’s caretakers, and this educational arrangement is strictly business, Rindi hopes that despite her family’s economic status, she’ll form friendships and find a way to fit in to this elite blueblood Texas high school. But as she weaves her way through the school parking lot riddled with luxury cars and perfectly manicured and coiffed wealthy kids and their “super model” looks, doubt creeps in.

That is until in a desperate act to shut down the rich snobs provoking her in her first class, Rindi blurts that she’s the granddaughter of Mrs. Grayson. This little white lie quickly launches her to instant popularity and friendship with the three “it girls” including the Queen B herself Lizzy Ruston. The lure of her newfound popularity propels Rindi to accept favors, money, a ball gown and even the brash and calculating advances of bad boy, Lamborghini-driving Cooper Hollingsworth. who becomes her boyfriend overnight. But fame comes with a price. Not only is Rindi struggling to live up to the lie, but several of the “in crowd” are on to her charade including Lizzy’s twin, and Rindi’s crush from the first day that she met him, Tyler Ruston.

At every turn Tyler is tossing her a look or question that provokes her guilt, and at the same time they develop a “forbidden” attraction. As luck would have it, Tyler learns of Rindi’s secret. He unwillingly promises to help while softly encouraging her to be proud of who she is and come clean. She so desperately wants to, but finally having friends, sleepovers, shopping sprees and spa treatments proves to be too alluring.

Rindi is mature enough to realize her error in judgment and continuously struggles inwardly with her deceit—“For just an instant, I wondered what my mom would say if she knew what I was doing,” “I was disappointed in me too,” and “I was in love with a guy who’s off limits and dating a guy I didn’t feel more than friendly towards” are just examples of her internal warring.

Finally, she decides to come clean but not until after the end of the year and after the Grand Berkley Ball. Unfortunately, karma has a funny way of settling things. When Rindi agrees to help Lizzy pull off a prank involving blackmail and public humiliation, she ultimately pays the price. Her secret is soon spilled putting her social status, scholarship and her relationship with Tyler in jeopardy.

If you’re a fan of ‘Mean Girls’, ‘Clueless’ and well, ‘Cinderella’, this fun teen romance by Sherri Renee will keep you hooked to the final, and surprising, conclusion.

Confederates In The Attic: Dispatches from the Unfinished Civil War
Keys To Freedom