Eagles Over Britain
By Kimberly Monaghan on April 8, 2021 in Books 4 Fun, Books 4 Thrills 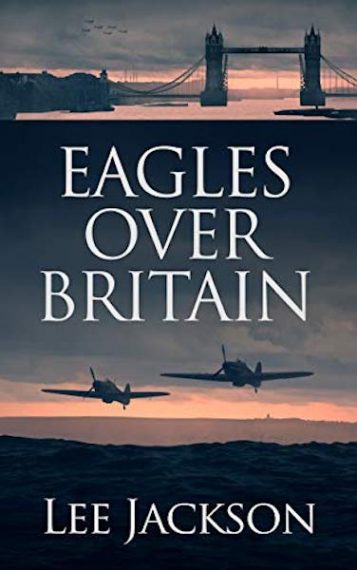 If you’re a lover of historical fiction like me, this is a must read. But let me add to some of the compelling reasons you should read Eagles over Britain. Imagine if John Jakes, Tom Clancy and Stephen Ambrose (of Band of Brothers, fame) collaborated. You’d end up with a historical saga, military suspense, and World War Two drama that keeps you on the edge of your seat for the entire ride. And that is what you’ll get with Eagles Over Britain by Lee Jackson. Now, if I haven’t muddied the waters, I want to proceed with my review.

The setting is Britain during the height of the war with Germany and the uprising of the French Resistance to support their overthrow. The family at the center of it all is Paul, Claire, Lance and Jeremy Littlefield who are in the thick of the war, separated from their parents isolated on Sark Island.

Lance has been captured by the Nazis, and his younger brother Jeremy, a pilot, covert operative and veteran of Dunkirk, is determined to find him and bring him home. On the home front, Claire has secretly been working as a codebreaker while Paul, who discovered her occupation, has now been sidelined from the fight due to his intelligence breach. Though it’s too risky if he should get captured, Paul is determined to get back in the game. And he eventually gets his chance when Prime Minister Churchill becomes aware of his talent and sends him on a covert mission to the U.S.

While fleeting reunions take place, these siblings have been torn apart due to their work in the war. Throughout the battle, relationships form in the form of friendship, love and even paternal care, when Jeremy rescues an orphaned French boy. The story intertwines their journey by offering you the perspectives of each.

You are entrenched in their journey, the heartbreak and gritty determination to defend their homeland as their continued sacrifices and bravery push them onward, despite the bitterness of war.

Oh, and this is just the beginning. No spoiler alert here, but Jackson tees you up to anticipate a sequel. Once you’ve been introduced to the Littlefield family, you’ll become vested in their story and root for their survival and freedom.