Her Perfect Life
By Kimberly Monaghan on February 12, 2021 in Books 4 Fun, Books 4 Thrills 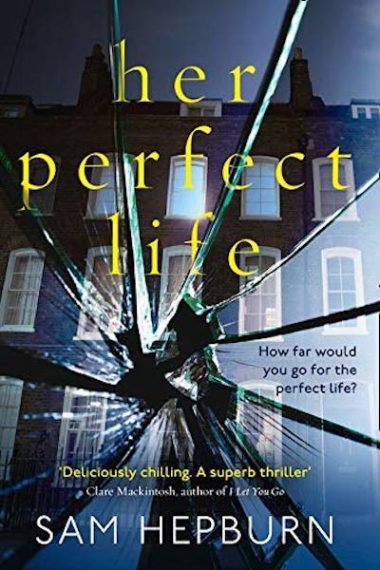 For many people these days the constant pursuit of perfection is an obsession. And for some, this is the only path to find the recognition and love they crave. This is the story of two women, one who has the perfect life and the other who will stop at nothing to take it from her.

Gracie Dwyer is a celebrity lifestyle and culinary influencer who gives everything to her growing career. Her star has risen so high in the U.K. that now they want her to host a show in the United States. But this grueling schedule and overwhelming demand on her time has put a strain on her ‘perfect’ home life. She doesn’t get the time she wants to spend with her little girl, Elsie, and she’s reshoring the relationship with her husband who’d had an affair.

She also has a stalker that has surfaced once again.

Thankfully, she runs into an old acquaintance, Juliet, who just so happens to be in the public relations industry and has offered to help Gracie navigate these hurdles and keep her image impeccable. And since Juliet’s daughter, Freya, is the same age as Elsie, the business relationship between the two women quickly evolves into a friendship. But what Gracie doesn’t know is that this relationship has been carefully orchestrated by Juliet. And that her intentions are not as innocent as they seem.

The disturbing behaviors that accompany obsessions and the darker side of celebrity life come to light in this fun crime thriller book by Sam Hepburn.

While the story is shared from the two maid character’s perspectives, you first find a stronger kinship with Gracie in how much she is trying to be everything to everyone and still the perfect mother and perfect wife, not to mention presenting the perfect image to the world. The sad truth of her husband, Tom, straying simply because he doesn’t have enough time with his mogul wife is all too common. His ego has got in the way and Gracie must find a way to move past his betrayal.

Then enters Juliet with her own set of problems, financial issues, a scared and often neglected daughter and a deadbeat ex-husband. You feel sorry for her but grow frustrated as she keeps running into trouble in every chapter in her pursuit of emulating Gracie’s life. It’s sad that these two women, who could be the missing link in each other’s lives, turn on one another as a result of their broken relationships.

And there is of course the element of suspense. The reader is challenged to understand the impetus behind Juliet’s motives and at the same time uncover the true identity and motivation of the stalker. It has shades of A Simple Favor by Darcey Bell in the way that the two women bond over the idea of helping one another, Gracie giving Juliet a leg up and Juliet desperate to be part of Gracie’s perfect life.

This book is a great read and is impactful with the multitude of characters, and sub characters, and layers of psychological challenges each one of them is facing on their own personal rise to perfection.