Legacy of Lies
By Kimberly Monaghan on November 6, 2020 in Books 4 Fun, Books 4 Thrills 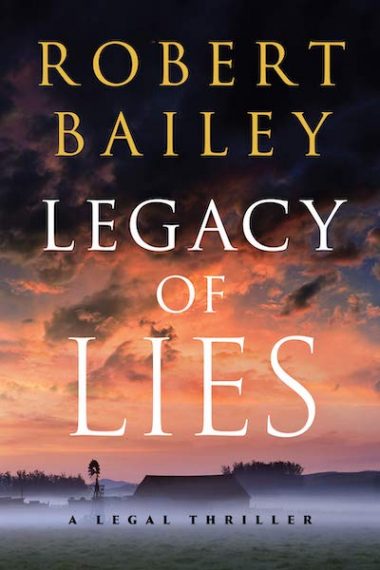 In Robert Bailey’s first book in the Bocephus Haynes series, he sets the tone for Bo’s comeback when he commits to defend his friend and colleague, Attorney General Helen Lewis, who’s been accused of killing her ex-husband.

A down-on-his luck former top defense lawyer, Bo Haynes has led a troubled life. He was falsely accused of a crime and put on suspension, then he lost his life-long mentor to cancer, his wife to a murderer and now the custody of his children to his bitter father-in-law. When Helen, desperate for the defense of the best trial lawyer she knows, confronts him by calling him out on his lethargy and victimhood, Bo relents and takes her case. In doing so, he not only finds himself grappling with a weak defense and a client who’s lost public support but walking blindly into a vicious battle with a notorious businessman who’ll stop at nothing to hurt Bo and prevent Helen from interfering with his devious plans.

Hands down a fun and gripping mystery with an incredibly surprise ending. But this book, and the protagonist Bo, bring more than just a thrilling read.

Within lies the deeply painful comeback journey of a man who is fighting against the odds. As a black man in a small southern town filled with hatred and ignorance, it was an uphill battle raising his family there let alone building a portfolio of clients.

“In courtrooms across the South, you’re going to stand out,” his mentor had said. “Own who you are and tell your client’s story to the jury your own sweet way. If you do, you’ll be successful.” His mentor challenged him to use that to his advantage and in doing so, Bo built not only a life but a name for himself. He also turns to this sage advice and the determination of bringing his children home, when he re-enters the town that had once turned its back on him.

Once you’ve experienced the electricity of this character’s noble fight back into civilization, you’re hooked. And he continues to take it on the chin throughout, opening your eyes to not only his plight of injustice, but also the overwhelming burden of making a comeback when you are all alone in the world.