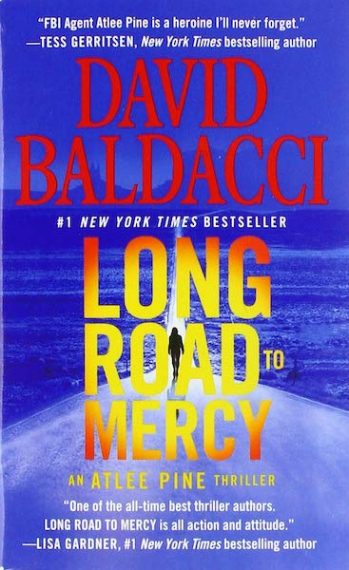 Losing her twin sister when she was only six years old, Atlee Pine has one goal in life, to bring her sister’s killer to justice. Assigned to the Shattered Rock, Arizona field office, Pine is an FBI agent who prefers the remote quietness over the action of the Washington DC bureau. This location also allows her closer access to the serial killer she believes is responsible for her sister’s death.

Consumed with getting his confession, her lifelong quest is suddenly interrupted by a grisly scene at the bottom of the Grand Canyon.

A pack mule has been found stabbed to death and its rider is missing. What appears to be a gruesome and inhumane senseless killing and a bewildering disappearance, quickly turns into something more sinister. After uncovering what seems to be a terrorist’s plot, Pine is ordered to step back. But when her desire for justice and her personal plight become intertwined, she backs down.

David Baldacci’s newest protagonist doesn’t disappoint. And Atlee Pine is not your typical heroine. She’s an athlete, competitive bodybuilder and a steely and determined woman consumed with finding justice for her sister and everyone she protects. Nothing stops her from thrusting herself in the midst of any conceivable danger, making her a fierce rival, and in many cases, a better suited agent than her male counterparts.

Kudos to an author who can reverse the gender script and build a character that’s not only multi-layered but compelling and interesting in a way that you find yourself growing more curious about Pine’s backstory with every turn of the page. She’s driven by guilt and feelings of failure from missing out on her Olympic dreams, to the ever-gnawing seed of being unable to save her sister. I hope the next book in this series goes deeper into her history and gives her the chance to get the retribution she so desperately seeks.

Little Free Library
The Procrastinator’s Handbook: Master the Art of Doing It Now