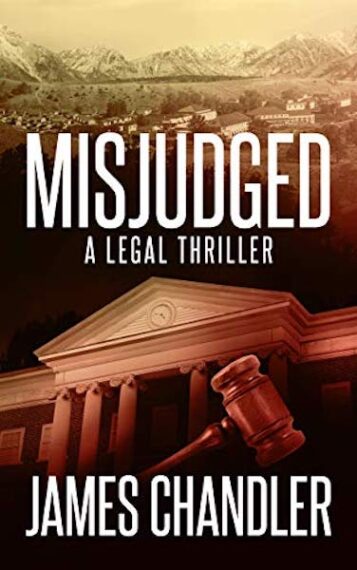 Don’t you just love it when you find a character that you fall in love with? I know I do. That’s the way I feel about James Chandler’s character Sam Johnstone introduced in Misjudged, the first of this legal thriller series. To date, I’ve read all three—including One and Done and False Evidence—and can’t wait until the release of his fourth this year.

So, let me tell you a little about why I love Sam.

He’s vulnerable and strong and has a spirit of a fighter, risking everything for something he believes in. A veteran and captain who not only lost his leg during a tour but lost many of his men during a horrific attack. It’s because of the latter that he’s not only suffering so intensely from PTSD but also alcohol addiction. He’s ridden with survivor’s guilt and struggling to make it through each day. This is a character you can get behind.

But Sam has had some success since his return overseas.

He graduated from law school and has won some insurmountable cases. Yet these successes, coupled with his PTSD and self-sabotaging lifestyle has cost him plenty. He was fired from his law firm in D.C. Thanks to the kindness of his friend, Sam was offered an opportunity in a small town of Wyoming at a law firm. But after making a friendship-costing career decision, he’s now struggling to make ends meet in his own practice.

Each volume in Sam’s story details a case he’s embroiled in, defending misguided and sketchy clients often with dangerous affiliations, while working alongside law enforcement to uncover the truth. And because of that, Sam walks himself right up to danger on more than one occasion. All three books contain the ingredients of a great legal thriller, provoking edge-of-your-seat visceral reactions and forging with the reader underdog allegiances reminiscent of Luther Whitney in David Baldacci’s Absolute Power.

Assertiveness Training: Stop People Pleasing, Feeling Guilty and Caring for What Others Think, and Start Speaking Up, Saying No, and being More Confident.
Executive Presence: The Missing Link Between Merit and Success