Reach A Child
By Kimberly Monaghan on May 15, 2022 in Book Charities, Books Uplift

By Kimberly Monaghan on May 15, 2022 in Book Charities, Books Uplift

Since 2007, the non-profit organization Reach A Child has been providing new children’s books to first responders in Wisconsin as a tool for comforting children in crises. Police, Fire, EMS, Sherriff, and State Patrol Officers serve as the primary vehicle ensuring a child facing trauma has an uplifting read to call their own. They not only deliver these precious gifts, but many read them to the child which not only serves to ease anxiety but builds a bond between child and responder.

“The program was founded by a husband-and-wife team in Middleton, Wisconsin,” explained Officer Kate Mann, Public Affairs/Crime Prevention Police Officer for the City of Oshkosh Police Department and the Community Outreach Coordinator for Reach A Child.

She shared how the couple started the growing effort simply by collecting books their children enjoyed and giving them to their local Police and Fire Departments.

They hoped the books could be used to help children facing traumatic situations. Since their first delivery of donated books in 2007, the program has grown to positively impact the entire state’s children in crisis.

“Some of the most difficult calls you respond to as a First Responder involve children,” said Mann. The books serve as a catalyst in diffusing anxiety and building rapport. Since the books are donated through local community members and fundraisers, it eliminates the financial burden for the recipient and the agency. It also allows public safety officers and emergency technicians to have more than enough books on hand when a crisis occurs.

The 20,000 plus donated books have become integral elements in a first responder’s crisis tool kit.

“Two years ago, there was a significant car accident in Middleton resulting in a young girl getting pinned in the vehicle,” said Mann. “She was extricated and placed in an ambulance where Aaron Harris, Middleton Fire Chief, elected to ride with her to the hospital. He opened the backpack with 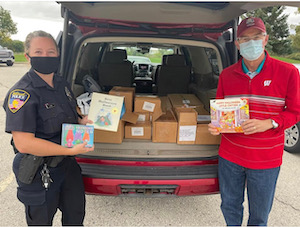 books and began reading one. The girl was totally focused on the book, rather than her pain. When he finished the book, she said ‘Read it again!’ which he did multiple times. Chief Harris has told the public that the most valuable piece of equipment in the Department is the backpack filled with new children’s books.”

Officer Mann has used the donated books in a variety of ways including during disturbance calls when the adults were placed in custody and children with caregivers. During a crisis and in transition, she reads to children to help them take their minds off the trauma unfolding around them.

“I have also used the books during community events to initiate conversations with both children and their parents—thus helping to continue building strong working relationships with our community members. All of the kids that I have given books to love the new books and were very happy and excited to receive them!”

The mission of Reach A Child is to provide children’s books and backpacks to every first responder department in the state of Wisconsin. They also hope to build the effort in communities that have yet to experience the positive impact books can have in calming a child in crisis. To donate and support this cause, you can reach out to Officer Kate Mann directly or via the program’s website at: Kate.mann@reachachild.org  and    https://reachachild.org