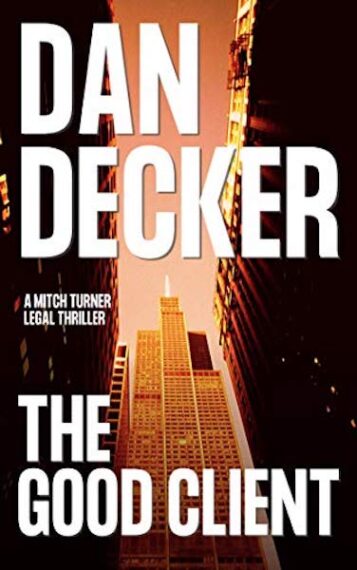 This is book one in the Mitch Turner legal thriller series by Dan Decker. I’m amid reading them all because, if you’re like me, you love a good series and a great protagonist.

Against his better judgement, defense attorney Mitch Turner agrees to defend his law clerk Timothy Cooper when accused of murdering his estranged roommate. He’s drawn to the case because it’s a puzzle, and Mitch loves puzzles. And he honestly thinks this shy and nerdy kid couldn’t be culpable of such a heinous crime. But as he gets deeper into his own investigation, he wonders if he’d made a mistake. Timothy is not as cooperative as he should be, continually putting up roadblocks, withholding details about his past, and acting belligerent when Mitch attempts to question his mother. Timothy Cooper is anything but a good client.

Great read. Simply put, the cases are complex and leave you hanging until the end.

The supporting characters are highly complex and intriguing, even when they’re up to no good. And most importantly, Mitch is a likeable guy, even though he’s that defense attorney’s face you see plastered on all the billboards around town, he has a bit of an ego that lends to his perfectly crafted image, and he’s got a personal history with a lead female detective and an assistant district attorney.

Decker has created a colorful cast of characters you’ll want to get to know and a lead you’ll be determined to follow.