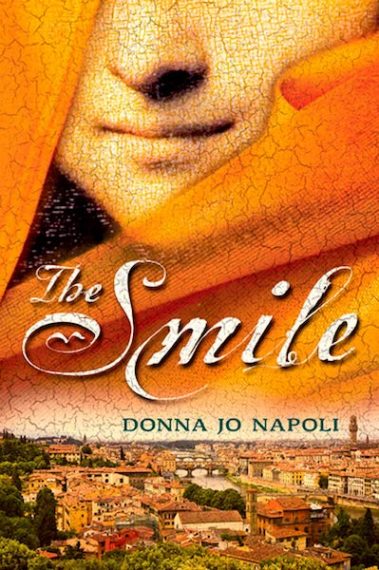 This story begins in the Italian countryside where thirteen-year-old Mona Elizabetta struggles to become the noble woman she’s destined to be. Her family, however, are challenged to keep their silk-weaving business thriving during economically challenging times.

Still, Mona’s mother is planning to give her daughter an elaborate party to meet eligible husbands, but upon her mother’s untimely death the party is cancelled and Mona turns her grief into seclusion and working alongside her father. Then after he remarries into nobility, Mona is given another chance at finding a suitable match and is introduced by her father’s friend Leonardo da Vinci to a young man, Guiliano, heir to the powerful Medici family. In the end, Mona is forced into an arranged marriage despite the fact that she has given her heart to Guiliano who is smitten with her infamous smile.

This tribute to the woman behind da Vinci’s masterpiece is another wonderfully researched and well-crafted production from Donna Jo Napoli. Artfully blending fact and fiction, the author tells a tender story of a girl coming of age during the turbulent enlightenment period. Readers will be moved by the plight of the three-dimensional main character torn between family honor, being true to her life long friend, respecting the wishes of her deceased mother, and giving into her heart.

Something Old and Something New
Raise Your Hand