You Matter: Learning to Love Who You Really Are
By Kimberly Monaghan on April 9, 2020 in Books 4 Success 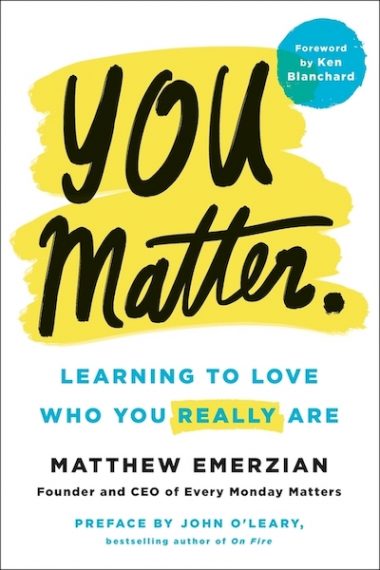 If you’ve got a couple of hours and you are human, then you’re the target audience for this new release by Matthew Emerzian. I guess that’s my convoluted way of saying that everybody should own a copy of this book. Sharing his fascinating journey from living the glamorous Hollywood lifestyle to picking up trash on the side of the road then on to his philosophical awakening on what really matters most, Emerzian entertains, enlightens and informs.

But most importantly, he challenges us to listen to ourselves and discover and embrace who we are and who we’re meant to be.

The focus on how you matter and why you are invaluable to this world is the overarching theme of this book. This isn’t a ‘fluff’ book that is filled with banal adulations, but rather substantial reflections and thought-provoking questions that challenge the reader to explore their worth and find their value in society. It also explores the theme of how we can embrace and foster an environment of respect. Emerzian also tests the reader to avoid social media competition and desist defining your worth and future based on societal expectations.

While You Matter, and the lessons within, resonate deeply with me, this last takeaway really struck a chord for me in a most recent interaction. A colleague of mine asked me why I wasn’t going for broke with my business. At first, I was a little affronted, wondering whether they were trying to let me know that I was falling short in my efforts. Upon further inquiry they clarified how they believed that I could really build an empire if I wanted to. They told me that “my brand was on point and I should capitalize on that” and really “build an empire.”

Why not? Well, because that’s not what I really want. The very same week, I received You Matter in the mail from John at St. Martin’s Press. Talk about serendipity. As I read Emerzian’s journey I felt that I had found my kindred spirit. Being okay with what it is you really want to do and not living the life others want for you is a lesson that I’ve believed so powerful for my clients, but up until then, wasn’t heeding my own advice. I felt that I would be letting others down if I continued the “client-centered” path I was on versus “building my empire.”

This is a book I plan to gift to so many people in my life. I want them to know, to really know, that they matter, especially to me. I don’t think we ever say this enough to ourselves, to each other and even to people we don’t even know.

In the Face of Fear: Buddhist Wisdom for Challenging Times
Fiction Friends Versus Fictional Friends