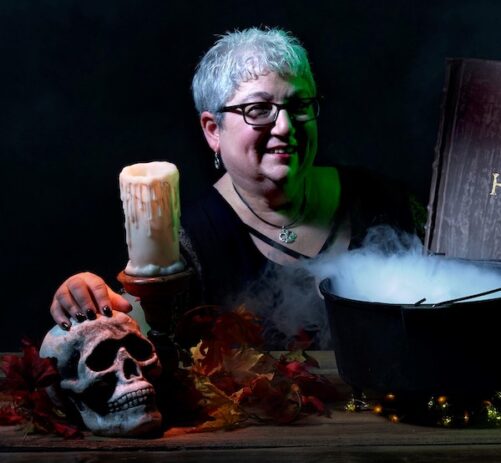 Author of medieval mysteries, noir tales and paranormal must-reads, Jeri Westerson did not set out to be an author. She had the acting bug and as a creative artist, she pursued her creative passions in Los Angeles. But when she had a baby, she decided writing would not only be a great way to be a stay-at-home mom but would allow her to pursue a creative outlet. In time, she found success and happiness as an author. Meet Jeri…

You are an author, but is it your day job? If not, what does fill your days? It is my day job. Has been since 2013 or so. Writing full time has been a blessing.

Did you always want to be an author? I did not. I had dreams of becoming an actress and spent all my energies in that direction. Of course, I did have hobbies. One of them was drawing and the other was writing stories for my own enjoyment. In fact, I wrote my first Tolkienesque fantasy when I was sixteen, a four-hundred-page hand-written novel. It wasn’t too bad. As I went through my drama training in high school, I designed all the posters and programs, and continued somewhat in college. In college, I did real world auditions which are pretty brutal, and decided, “Nope. Nerp. Not doing this the rest of my life.”

I suddenly had a career to fall back on; graphic design, all those posters and programs and logos I designed. People made a living at it. Who knew? I hadn’t. So, I switched majors and was a graphic designer and art director in Los Angeles for the next ten years. When I put a pause on it to have a baby and decided that I could get back to it when he was a toddler, I had discovered that the whole industry had turned to computers…where I had not. So, I did a little soul-searching and decided I wanted to make a go of being a historical novelist because I had written several more novels along the way and it seemed like a good solution to be a stay-at-home mom and churn out the books. How hard could it be? (Insert raucous laughter).

It was hard. I had researched it—formatting the manuscripts (and I learned to compose on the typewriter and eventually computer), how to get an agent—and began writing seriously for publication and trying to find said agent. After three years of querying, I landed an agent, but we couldn’t get a manuscript sold. It seemed the kind of historical novels I liked to write with 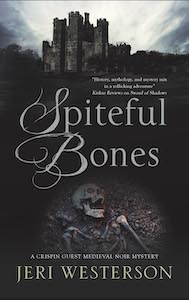 an ordinary person in extraordinary circumstances, wasn’t the kind of thing editors wanted to publish. They wanted something of the more famous characters from history that you could find at court. After my first agent and I parted ways, I wrote still more historicals that wouldn’t get published until I happened to be chatting with my first agent and she suggested I write medieval mysteries since mysteries had a bigger, wider market.

I had to step back and learn to write a mystery and form the characters who would inhabit it. So, while that was going on, I wanted to see if anyone would pay me to write, so I fell back on yet another thing I’d learned in high school—journalism—and got myself a gig as a stringer for one daily and several weeklies, while also selling articles to quirky magazines, writing on spec (I sold every one of those). Finally, not too long after getting my fourth agent, he managed to get me a contract with St. Martin’s Minotaur for the Crispin Guest series. And it only took fourteen years!

What is your most recent book and what inspired you to write it? This is the last in my Crispin Guest Medieval Noir series, The Deadliest Sin, which will be released in 2022. The series is 15 books long, and this is the book I knew I would write to end the series. It’s been a lovely ride, and I ventured into some other genres along the way (urban fantasy, steampunk, LGBT mysteries under the pen name Haley Walsh,), but that character and that series will always have a huge place in my heart. That was the last book I wrote. The last that was published (and pictured in this article) is the fourteenth and penultimate book in the series, Spiteful Bones.

How do you hope your book uplifts those who read it? Crispin was a disgraced knight who had lost all that defined him—his wealth, his lands, his titles. He had to start from rock bottom to restore his honor and place in the world, and he discovered along the way that it didn’t mean being a rich man and seated with other wealthy and honored people; humility went a long way, and loyalty was more precious than gold. I think that’s something that most of us should learn about our own lives, what’s important. Family becomes an important aspect of these stories, not the families you are born into, but those that you make. I was always interested in character more than the mystery—creating interesting and realistic lives—but the mysteries are fun to devise, too. Who doesn’t want to find a skeleton, or a dead body in a locked room?

What are you most excited about with this book? This wraps up his story and I know a lot of readers are saddened by this, that there will be no more Crispin books, because the characters began to mean a lot to them. So, I hope they will enjoy it and see why I ended it the way I did and be satisfied with that ending.

How did writing a book help your career take off? I would say it was more like writing many books. I wrote fifteen novels before I sold my first one. All practice for what was to come. Getting into a rhythm, understanding the industry, learning how to market, and getting started with that ever before I got a contract, were all contributing factors. I think mostly learning that an author can’t make a career in a vacuum, that there are many people involved that will help you on your way. Be professional because you will be working with many professionals. Listen to their advice. Be humble. Work and fail a lot.

What advice would you give to someone wanting to succeed in your professional industry? Pretty much what I said in the previous question. Because I am also an indie author, I think being a professional and hiring other professionals will go a long way into making your book something a reader will want to slap down their hard-earned wages for. You’ve all seen the terrible covers of some self-published books. That cover represents you and your skills. Don’t go with an amateurish cover. As a former graphic artist and art director, I had to work with a lot of professionals. Can I draw/illustrate? Sure, but I also know my limitations. I hire people for my cover designs. I hire editors. It’s the face of your work. Make it the best, make it professional.

How do you handle setbacks and criticism? With no aplomb whatsoever. Ha! So do as I say, not as I do.

How do you hold yourself accountable and achieve the goals that you set forth? They’re my books. I’m not judged by the one before, but by the one the reader has in their hands right now. Write good books. If you’re excited about writing it, readers will be excited about reading it.

How do you structure your day and make time for writing? It’s my job, so I write every day, including weekends and holidays. But my attention span wasn’t what it was when I started. The industry is tougher, it’s harder to land an agent and sell books, so there is more to do than merely write. When I started out, authors always had to be on top of their marketing, doing a lot of it themselves, even when you have a big New York publisher, but it’s imperative now. I don’t always have the stamina or the cash to go to every convention or travel to every bookstore. Of course, these are things we can’t even do right now. I work on my emails in the morning (because my agent is in New York and I am in California), and then I pretty much plan to write on and off all day, taking a lot more breaks than I used to, cutting down on my minimum page count per day (it used to be ten, now it’s five), and doing more thinking.

What do you find most fulfilling in the career that you’ve chosen? I like working by myself and creating these adventures. I like the research and figuring out the best way to layer it in there. I love chatting with readers and being a mentor on occasion.

What book uplifts you? Really great prose and a fun adventure to fall into.

Before She Disappeared
Duke and the Lonely Boy

About 13 minutes ago from Kimberly Monaghan's Twitter via Hootsuite Inc.