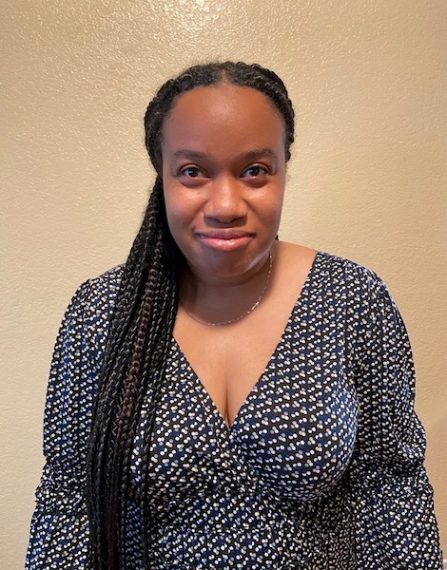 Author Monique Fisher’s mission is to work according to the Toni Morrison quote, if there is a book that you want to read, but it hasn’t been written yet, you must be the one to write it. She’s an LA native and has been writing since the age of ten but says she didn’t truly fall in love with it until college. Monique attended CSULA where she earned a bachelor’s degree in Theatre Arts and Dance with a concentration in stage directing and playwriting. In addition to writing plays, she’s written Suz and Keem, two spec scripts for TV and three television pilots and is currently writing (and rewriting) five romance novels.

Monique is the co-founder of the BFCC (The Black Female Comics Collab). It’s comprised of a group of Black women comic writers and artists whose membership includes individuals from the US and Canada. Their goal is to make comics with strong Black leads that empower as well as entertain all while celebrating solidarity and sisterhood and they’re currently working alongside the ladies of Hex Comix on a superhero anthology.

You are an author, but is it your day job? If not, what does fill your days? I work for a non-profit performing arts organization called Grand Performances. We put on free concerts in Downtown LA. Currently due to COVID, we’re doing virtual events and I’m working from home. In addition to that and writing, I’m also working as a stay-a-home mom to my two kids, Michael, age five and Alexander, age three.

Did you always want to be an author? Not always, but writing has always been part of my life. I started doing it when I was ten and finally considered it as a career in college. I have a BA in Theatre Arts and Dance. My concentrations were directing and play writing. Directing took center stage for a while and I didn’t go back to writing until about eight years ago. I looked into screenwriting and took several classes. My goal was to break into TV writing. One day, I decided to take a comic book writing class. I had always loved comics, sci-fi and fantasy but never thought about writing it. I fell deep into that and have been there ever since. I recently fell back in love with romance novels and have found that I thoroughly enjoy writing those as well. It took me a while to find my niche but I’m glad I finally got here.

What is your most recent book and what inspired you to write it? I’m always writing several things at the same time but the book that’s about to be released is a graphic novel called Suz and Keem. It’s being released through Macroverse Media, a digital comic book company that releases 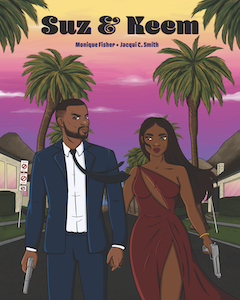 comics and graphic novels one issue or episode at a time. The first issue/episode of Suz and Keem launched in April.

I got the idea from watching a scene from the TV show Snowfall. In the scene the main character, Franklin Saint is talking to a young lady who shares a similar background as him, but they have chosen different paths career wise. He’s a drug dealer, she’s a social worker. At the end of the scene, he asks her out and she turns him down. It stuck with me because I’m a sucker for great dialogue that doesn’t sound like dialogue and that scene is a masterclass in it. It also got me to thinking, what if she was a criminal too? Would she have still said no? Probably not. This lead me down a rabbit hole where I came up with a story about two people with vastly different backgrounds who work in their respective criminal enterprises that meet, fall in love, and are forced to go head to head with people who want what they have and are willing to do whatever they can to get it. I wanted to examine how far they’d go for each other, how devoted they are to each other. That’s how Suz and Keem came about.

How do you hope your book uplifts those who read it? I hope that it shows people that there are stories out that need to be shared about the Black experience that don’t center on trauma and pain.

What are you most excited about with this book? Getting as many eyes on it as possible. I’m eager for it to be out in the world and for people to hopefully enjoy reading it as much as I enjoyed writing it.

How did writing a book help your career take off? I began writing this book around March of last year and by June I had my first draft finished. I was working on my revisions when the murder of George Floyd inspired the worldwide Black Lives Matter protest and several folks in comics and traditional publishing were asking for Black writers to send them their work. I sent mine to writer Mary Kenney. She told me that it was ready to be shopped. I began looking for an artist and after a false start I found the very talented Jacqui C. Smith. But before I found her, I took a class taught by comic writer Alex Segura through Lit Reactor. I got a lot of great feedback from him and my classmates which I used in my rewrites.

One day I was talking to my friend Carrie and she mentioned knowing a group of ladies who ran their own comic company called Hex Comix. She introduced them to me, and we all got to talking and hit it off. I told them about Suz and Keem and the journey I was on to get it published and they told me about Macroverse. They introduced me to Eben Matthews, the co-founder. He and I had a long talk and he agreed to work with me. Midway through I lost my original artist and found Jacqui a couple of days later. We immediately got to work breaking down the book into episodes and getting it to Eben. Jacqui’s been hard at work on the art and here we are.

What advice would you give to someone wanting to succeed in your professional industry? It sounds almost cliché now but read a lot and write a lot. There are no short cuts.

Being an author today is like running a business. How do you manage all your publicity, social media and keep your engagement up with readers? This is my first time really delving into that and thankfully Macroverse has an amazing marketing and PR team. I have, however, been tweeting up a storm and have been messaging various outlets asking for help with promotion. So far, I have gotten a lot of great responses and encouragement from many sources. It’s been wonderful witnessing how many people want to help and want to see Suz and Keem succeed.

How do you hold yourself accountable and achieve the goals that you set forth? I write every day. I know that’s not possible for some people, but I try to at least write a page a day. Most of the time I end up writing five to ten pages a day. It’s like once I get started, I can’t stop.

How do you structure your day and make time for writing? I work from 8:00am-4:30pm, in between that time I cloth, feed and play with my kids. When my husband gets home (he works from home twice a week whereas I work from home five days a week) we take the kids out either for a drive or we go somewhere secluded so they can run around a play, we have dinner as a family, we give the kids a bath and get them ready for bed. From about 10:00pm-1:00am, I write.

What do you find most fulfilling in the career that you’ve chosen? Aside from the work itself, meeting like-minded people who enjoy writing as much as I do.

What book uplifts you? That’s a loaded question. Saga by Brian K. Vaughan, anything by Jasmine Guillory, Mimi Grace, Mia Sosa, Denise Williams, Waiting to Exhale by Terry McMillan, and Friends and Lovers by the late Eric Jerome Dickey.

Return on Ambition: A Radical Approach to Your Achievement, Growth, and Well-Being
Unsympathetic Victims