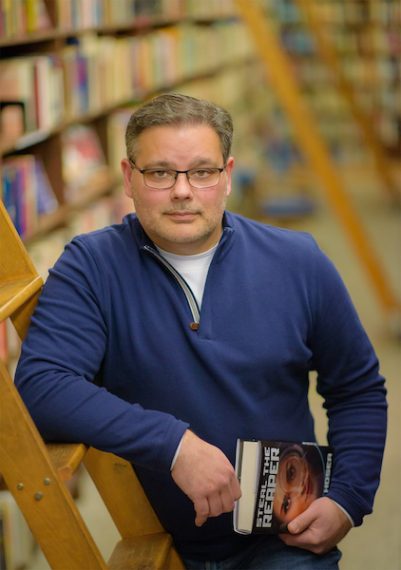 A veteran of the United States Air Force, Todd Hosea started his career serving at North American Aerospace Defense Command (NORAD) and Air Force Space Command headquarters in Colorado Springs, and NAS Keflavik, Iceland. Afterwards, he went on to complete his degree. Originally from Indiana, Todd spent many summers in Colorado where he says, “The mountains are my happy place.”

Currently, he lives in southern Indiana with his family and rescue dog, Lilly. When he’s not biking, hiking, attending concerts and the theater he’s busy working and writing. But Todd still found time to talk with us about his book and his life and provide some wonderful inspiration to authors and readers alike.

You are an author, but is it your day job? When not working on the sequel to Steal the Reaper, I am a talent and product developer.

Did you always want to be an author? Yes, I’ve always been developing stories. In fact, I wrote another novel before Steal the Reaper but when I finished it, I knew I could do better. I didn’t want to waste the idea, so I re-wrote it as an expanded graphic novel and flushed out a new and better story. Hopefully, I’ll publish it one day as a graphic novel or re-write it as a novel.

What is your most recent book and what inspired you to write it? Steal the Reaper was released in October 2020. It is an epic adventure about a female pilot, Captain Ava Tan, who is recruited by the CIA to infiltrate North Korea and steal a prototype vessel, known as the Reaper, 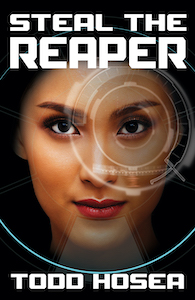 hidden within the wreckage of a crashed alien spacecraft. What could possibly go wrong, right? I was inspired to write this book about three years ago when I pondered what would happen if an alien spacecraft actually crashed on Earth? How would the world respond politically, militarily, etc.? Add to that, where’s the worst possible location the spacecraft could land? North Korea! The book took off from there.

How do you hope your book uplifts those who read it? I think my main character, Ava, is an inspiration to all of us. She endures a great loss early in the book while also struggling to deal with a crossroads in her career. Accepting the mission to steal the Reaper forces her to dig deep within herself, rediscover her inner warrior, and ultimately find her true calling.

What are you most excited about with this book? Steal the Reaper is meant to be a fast-paced read. There’s conflict at every corner which helps keep the story moving. Also, I love these characters. When I first started out, I didn’t have a plan for their arcs, it was all plot-driven, but over time I worked more and more on making these characters relatable. I wanted readers to feel their pain, elation, and fears. Now, I have this universe to play in and I cannot wait to see what the future has in store for each of these characters.

How do you handle setbacks and criticism? Accept the fact that every baby is ugly when you first start out. Writers need feedback, so my advice is to not hold on so tight to your creation that you’re not willing to accept feedback. For Steal the Reaper, my wife and daughter provided excellent feedback that helped me look at scenes and characters in a way I had not considered. My book is better for it. Lastly, I didn’t go into this hoping I would make my fortune. Don’t get me wrong, I’d love to make millions in royalties, but more than anything I wrote Steal the Reaper because I felt I had a story that needed to be told, and told well. Ultimately, that’s all I have control over. The rest is out of my hands, so I don’t fret over bad reviews or a lack of sales. I’m proud of myself for making my dream come true.

How do you hold yourself accountable and achieve the goals that you set forth? For me, I loved writing Steal the Reaper and couldn’t wait to see where it took me each day. That is what kept me going more than anything. However, there were times I struggled with scenes. When that happened, I had to dig deep because the book wasn’t going to write itself. I had to force myself to sit down in front of the computer and push through.

In past writing ventures, I was also my own worst enemy. I’d start with a new idea then shelve it when another story idea came along (squirrel!). With Steal the Reaper, I resolved early on that I was going to see this book through to the end. I wasn’t going to divert from my goal, and I actually turned down opportunities to do other things just so I could stay focused on finishing this book. Another favor I did myself was to not get hung up on wordsmithing. My motto was “write now and revise later.” Once I had that first draft done, it was much easier to go back and edit rather than try to get every word right the first time.

How do you structure your day and make time for writing? To make this dream happen while working full-time and having a family, I chose to wake up early and devote my first hour of the day to writing my book. Some days I wrote a few pages, others only a sentence or two, but I tried to get something down to keep progressing.

What book uplifts you? Any book with a soft leather cover uplifts me. LOL I love books that feel great in your hands. As for uplifting stories, any book that draws me in with a compelling story and intriguing characters. I love J.K. Rowling. Harry Potter and the Half-Blood Prince was my favorite in the series.

Anything else you’d like to share with your readers? I’ve had several people say to me that this is not the type of book they would normally shop for, but after they started reading it they couldn’t put it down. To me, that’s the ultimate compliment. I think you’ll find Steal the Reaper to be a fun adventure that is worth investing your time in. Be safe everyone, and here’s to a better 2021!

Meet the author and grab a copy of his book at his website and connect with him on Facebook.

On The Run
Eight Weeks to Optimum Health

About 13 minutes ago from Kimberly Monaghan's Twitter via Hootsuite Inc.