Cross Her Heart
By Kimberly Monaghan on January 19, 2021 in Books 4 Fun, Books 4 Thrills 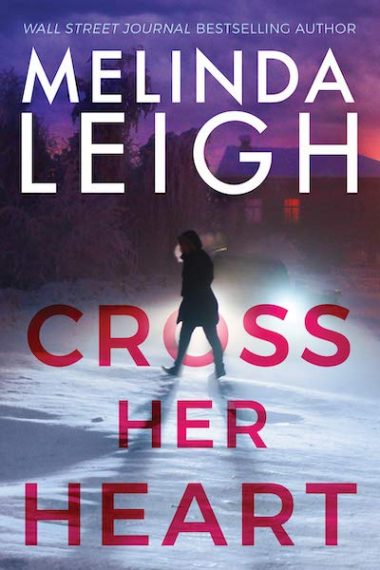 Melinda Leigh is a best-selling author for a reason: her books are winners. This is the first in the Bree Taggert series, which sends the protagonist, a Philadelphia homicide detective, back to her small-town roots. When she gets a pleading message of help from her younger sister, Bree is terrified. Something is wrong. When she finds her sister, Erin brutally murdered and her husband has vanished, Bree vows to bring the killer to justice.

Vengeance has a funny way of making you face your own demons.

That’s what happens when Bree jumps into this case. She is forced to reckon with her past, surviving a brutal father who’d killed her mother, orphaning the three children. She must also come to terms with the choices her siblings have made; Erin, a divorced single mother who has once again chosen a mate plagued with problems, and a brother, Adam who disappears into his art to avoid facing reality. Though her younger siblings have been able to survive the horrors of their upbringing, Bree has never really come to terms with the experience and while that has helped her become a better detective, it’s stopped her from trusting others and building a life of her own.

That soon changes when she runs up against Matt Flynn, who is out to prove his best friend, Erin’s husband, is innocent of murder. Both wanting to find justice for their loved ones and concerned they might get in each other’s way, Bree and Matt agree to work together, along with Matt’s rescued police K9, Brody. And the clock is racing against them, for as soon as they jump into their ‘unofficial’ investigation, break-ins, stalking and even more murders ensue.

Lovers of mysteries, thrillers and suspense will find all of Leigh’s books delightful reads.

These are also the very books you’ll read right through because you can’t put them down. But don’t assume this series is cookie-cutter in the way some suspense books unfold. This series invites in the psychological and emotional element that challenges the reader to really reflect on the impetus behind each one of the character’s motives. It’s not a stretch of the imagination to put yourself in one of their shoes, as there is an abundance of well-crafted and integral characters that have critical roles in this story. Five stars as far as I’m concerned!

Blind Ambition: How to Go from Victim to Visionary
Harness the Power of the Invincible Mind: Spatial Strategy to Success and Happiness