Blind Ambition: How to Go from Victim to Visionary
By Kimberly Monaghan on January 18, 2021 in Books 4 Success, Uplifting Books 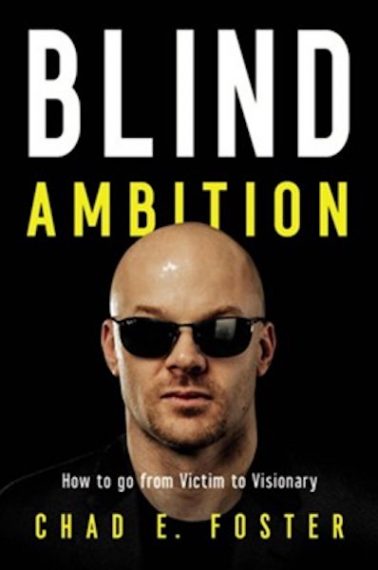 By Kimberly Monaghan on January 18, 2021 in Books 4 Success, Uplifting Books

Chad Foster shares his inspiring story in this book that challenges readers to turn tragedies upside down. Diagnosed as a childhood with Retinitis pigmentosa (RP) Foster learned early that he would eventually lose his sight. During college, Foster fell into a group of friends embracing the free-college lifestyle, partying and drinking and basically looking for anything that would numb the reality that his sight was failing. When his older cousin challenged him to rethink his behavior, he didn’t accept.

In fact, he hadn’t prepared for his immanent blindness or was he ready to face the reality and when his vision failed, he rebuked the idea of getting help.

Eventually, he embraced his cousin’s wisdom, reached out to Leader Dogs and met his lifeline, Miles, a German Shepherd who helped him not only navigate his new sightless world but embrace the idea that happiness isn’t a feeling it’s a choice. And by choosing to step into his new reality, he moved forward and upward, building a life that includes an amazing career, finding love and approaching life with an enviable attitude and perspective.

In his book, Foster highlights the emotional, physical, and political challenges of navigating a world as a blind man. It’s incredibly uplifting and inspiring and really makes you reconsider your perspectives on success.

He details the hard work of attempting to balance the scales in the workforce when you have a disability, from living alone, to interviewing for jobs to building a global career. But this is not a book designed to lecture the reader on differences, but rather encourage a positive approach to challenges we all have in common. One philosophy that stands out is his take on identity, and how it is directly related to the stories we all tell ourselves. These stories can be limiting or inviting, depending on which scripts you’ll embrace. When you don’t have the luxury of vision, you are less likely to be swayed by the superficial and that forces you to turn inward and reflect on what really matters.

It’s through these insights that Foster holds his blindness as a gift allowing him to truly embrace diversity in its most purist form and acknowledge “blind spots” that we all share. Foster does an excellent job in his argument of gratitude (yes, even in light of the pandemic) and the importance of having a vision of greatness to pull you through.

Heal Yourself: A Return to Wholeness – The Integration of Body, Mind, Soul & Spirit
Cross Her Heart