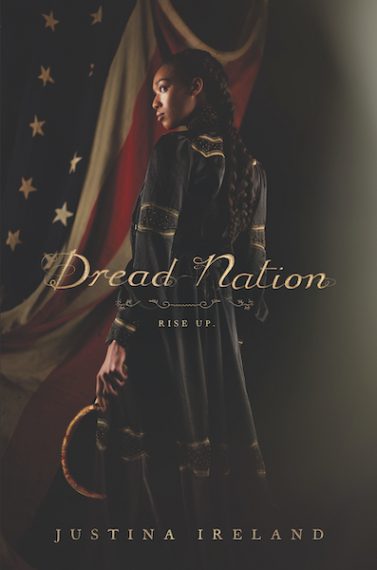 This is the first in a unique fantasy series by Justina Ireland told from the perspective of the Heroine Jane McKeene. Set in the reconstruction era, a new America is threatened by the dead who are rising up and waging war. Jane is a young woman training at Miss Preston’s School of Combat where she learns etiquette along with combat training so that she qualifies to be an attendant to, and protector of, the society’s well-to-do.

The battle Jane’s fighting is two-fold: first, against the dead rising up from the battlefields of Gettysburg, and second: the overarching prejudice that continues to unfairly repress her. Even though she was born into a wealthy family and of a white mother, Jane’s future is now set by the Negro and Native Reeducation Act designed to teach young girls of color to fight the walking dead.

Like many of her fellow young warriors, Jane demonstrates her enterprising and skillful abilities as she learns to wield her arsenal of weapons. But Jane wants more. Her insight and intelligence help her navigate the movement seeking to restore the country to the way it was before the Civil War. As she’s thrust out into a world of conspiracies, politics and a host of dark elements. Jane threatens their very survival.

Ireland is an amazing writer and artfully weaves history and fantasy into a world that comes alive between the pages.

This apocalyptic tale is yet startlingly reminiscent of the horrors of the Civil War from which there are so many parallels and at the same time fresh in its perspective and scenario. When I picked up Ireland’s series, I was enthralled by the storyline that thoughtfully finds a way to entertain young (and adult) readers while at the same time opening their eyes to the nation’s bloody and unjust history it references. The protagonist Jane is the right combination of grit, cheek and heart.

If you’re like me, you’ll whip through this read, rooting for Jane’s survival in keeping America safe and using her fiery nature and acute intelligence to change her destiny to one of freedom and opportunity.

When You See Me
The Mary Kay Way: Timeless Principles from America’s Greatest Woman Entrepreneur