Eleven Rings: The Soul of Success
By Kimberly Monaghan on December 28, 2020 in Books 4 Success 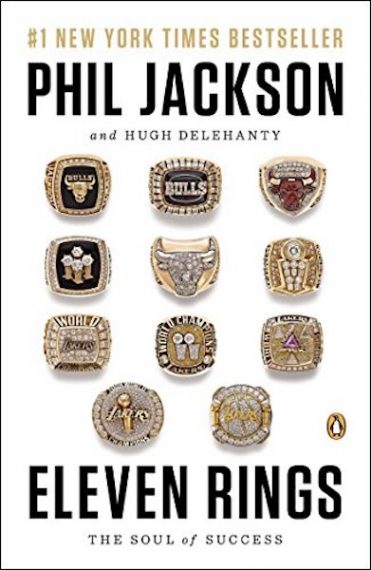 By Kimberly Monaghan on December 28, 2020 in Books 4 Success

Everyone knows legendary basketball star and coach, Phil Jackson, and much for his unconventional approach to leading elite athletes onto championship victory. What you may not know his how he chose a more mindful and spiritual path to success and how he thoughtfully blended spiritual wisdom with traditional methodologies to achieve unapparelled success on the court. His book, Eleven Rings, not only shares this tapestry, but also his story and his strategic principles for leadership, team engagement and enduring success.

He starts his book with the story of the ring and what it symbolizes—the quest of the self to find harmony, connection and wholeness. This overarching unifying power is the reoccurring theme with his approach to coaching (and leadership) as it is not about individual stars, but rather a selfless tribe, or team, that works seamlessly together to achieve one goal. Humorously referenced as the National Basketball Association (NBA)’s “Zen Master” for infusing Eastern philosophy and team building rituals into each practice and game, Jackson believes that building a collective consciousness into a team’s mission helps transform their approach and become worthy competitors.

It has certainly paid off.

Now imagine leading greats like Charles Barkley, Michael Jordan, Shaquille O’Neal and Kobe Bryant on your team while facing the opposing forces of champion stardom and team unification. It’s not easy, but Jackson found a way to empower his players to think differently about their ultimate goal and embraced the journey. This, ahem, also included putting ego aside. Wow. But not only did it skyrocket the Chicago Bulls and the Los Angeles Lakers to the top of the billboards, it resulted in his record-breaking career as an NBA coach and his players as authentic celebrities in their own right.

Can this approach work in the business world?

Jackson humbly admits he’s not a leadership expert, but I beg to differ. What he’s demonstrated in his body of work is how studying cultures of success, including tribal cultures, provides a holistic education on what is inherently important.

He touts the importance of openness, freedom and compassion which he models by spending time with his players learning their unique styles and personal aspirations and supporting them unconditionally. He also believes in trusting in the moment, igniting the warrior spirit and embracing the “true self” (ref: Carl Rogers). These are guiding principles in the evolution of a great leader and team player.

But this doesn’t mean he’s not competitive and tough when he needs to be. In his words, “Sometimes no matter how nice a guy you are, you’re going to have to be an asshole. You can’t be a coach if you need to be liked.”

He shares his key successes along with losses and hard lessons learned and gives an honest and raw account of his journey. I can imagine that a lot of NBA fans have probably read this book and its predecessor Sacred Hoops. Now it’s time for the leaders to follow suit. If you’re of the championship mindset, or long for team unification around an organizational vision, consider Eleven Rings your thoughtful companion to thinking differently and achieving sustainable results worthy of champions.

House of Brides
The Parables of Sunlight