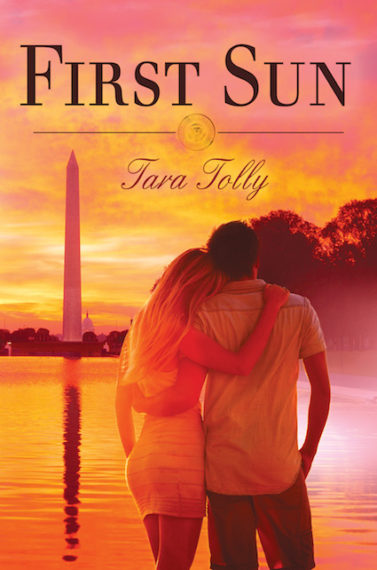 Love, scandal, kidnapping, heroism and Armageddon. If those aren’t enough ingredients to keep the reader on the edge, I don’t know what is. Author Tara Tolly packs all of these in her breakout novel “First Sun” about teenage love between an extraordinary heroine, Eden Warren, and the President’s son, Andrew Wellington.

The first half of the book reads like an American royalty’s version of the Princess Diaries. Eden, new to a prestigious Washington D.C. school, thanks to her mother’s new faculty appointment, wants nothing more than to fit in. Leaving her “bestie” back in Cedar Rapids, Iowa was hard enough, but suddenly becoming the object of the President’s son’s affection is overwhelming. She wants nothing to do with this bad boy who has a reputation for drinking, partying and going through girls like tissues.

But soon his persistence and reformed approach wins her over. She soon falls for the boy who lost his mother at a tender age and is, in a word, lonely. Pity and friendship draw her to him, but his charm, hotness, “intimidating perfection” and obvious infatuation with her win her over. Soon they both fall, a pure love blossoms and she is swept up into the world of celebrity.

With fame comes scandal and events that cause Andrew to slip back into his old ways. But through it all Eden finds a way to fight her insecurities and stay the ever mature and strong heroine, not succumbing to the jealousy and shocking curveballs thrown her way.

The clever way the author interplays history, politics and scientific conspiracies will keep readers of all interest turning the page. Still, for the lovers of a good teen romance and Cinderella romance there are plenty of dream shopping trips, black tie balls, dinners at the Whitehouse and private trips on Air Force One. But the fun and games, including sneaking around in forbidden White House rooms, finally come to a halt when Eden overhears a classified secret—a meteor is on trajectory to collide and destroy the earth.

This is where the book turns from teenage romance to a suspenseful race to doomsday. With a cocktail of betrayal, kidnapping, international plots and a life-threatening race to save the world, Eden and Andrew find a way to keep their love alive and stay together through the end.