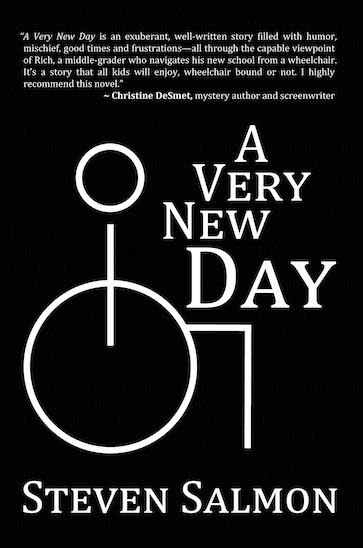 Rich Trout is starting his first day as a seventh grader at his new junior high. Being the new kid at school can be scary for any student, but he just wants to fit in and be like any average kid his age. But Rich isn’t average. He’s a wiz at algebra, has a photographic memory, is skilled with Morse code and is trying his best to navigate this ‘very brand new day’ while living with Cerebral palsy.

Rich is a smart, charming and driven boy facing a mountain of obstacles on his quest to simply fit in. “When I become used to a regular school, I believe that I am a normal student,” he shares. But his feeling of normalcy is challenged at every turn with the special accommodations, unwanted attention and physical limitations. Facing these struggles isn’t easy, especially coupled with the pain and self-doubt stemming from the indignity of his classmates’ blatant discrimination and name calling.

Yet from the very first page, the reader is drawn into Rich’s narrative and world. His friends Timmy and Amy encourage him through the day and even his cousin John, whose ribbing sometimes goes too far, helps him feel at ease. The honest prose of a young boy interested in girls, sports, science and having fun with his classmates carries you swiftly through his day’s journey filled with new sights, smells, sounds and experiences.

He tries hard to put the hurt and self doubt behind him in his efforts to prove he has the same feelings and aspirations as his classmates. But Rich soon realizes it’s not about being ‘normal,’ it’s about being special. And ‘special’ is not defined by physical or emotional challenges, but rather by leveraging his unique gifts and realizing his true potential.

The endearing character created by author Steven Salmon gives readers a glimpse from the wheelchair and the challenges faced by a boy, just like him, who conquers the limitations of Cerebral palsy to fulfill his dream of becoming a writer.