Kicking and Screaming: A Memoir of Madness and Martial Arts
By Kimberly Monaghan on December 7, 2021 in Books 4 Success, Uplifting Books 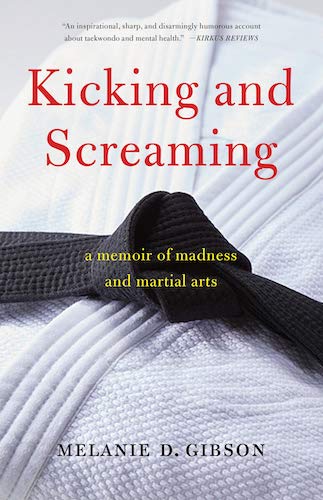 By Kimberly Monaghan on December 7, 2021 in Books 4 Success, Uplifting Books

We all have our unique ways of coping with setbacks. But when things spiral out of control, it can be challenging and, in some cases, seemingly impossible to fight your way back to some semblance of normalcy. But that’s exactly what Melanie D. Gibson did—fight her way back. Entrenched in a string of unhealthy relationships, addiction, and depression, she pushed herself beyond the precipice of a mental breakdown and back onto the mat—literally. Returning to the dojang of her childhood and once again to the tutelage of instructor Grandmaster, she found her footing and a brighter future through Taekwondo.

For Gibson, earning her black belt in this martial art was both an exercise and an exorcise.

Through her intensive training, she pushed through her mental suffering and embraced the discipline of an art that would give her the tools to heal. As she recounts her journey in a pattern of rocky relationships and self-medicating to escape her reality, she parallels this alongside the growing strength and self-esteem that came along with practicing Taekwondo. Each step forward opened her eyes wider to what she wanted and needed in a relationship and how she was fooling herself into believing the one that she was in was working.

Eventually, Gibson took a stand. She found her way back to a healthier life and embraced her personal freedom with vigor. Gratitude, joy, and self-respect became her priorities and along with that the choice to not depend on others for her courage but instead to find it within and always stand strong. As she shares in her memoir, “How you show up at the mat is how you show up in life.”

Source: PR By the Book

Image: PR By the Book

Autophagy: How to Use Your Body’s Natural Intelligence for Self-Cleansing, Anti-Aging and Rapid Weight Loss
Before She Disappeared