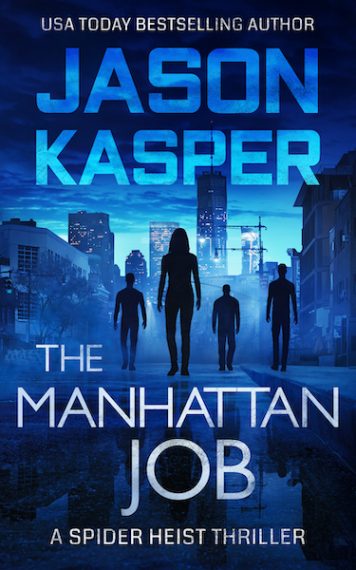 When incriminating tapes are stolen right from underneath their noses, the Sky Thieves team have their new mission. Sterling, Blair, Marco and Alec each have their reasons for wanting to recoup their bounty. The tapes are the key to bringing their enemy, corrupt politician, Jim Jacobson to his knees. A former colleague of Blair’s when she was in the FBI, she’s got a target on her back ever since her team busted her out of prison. So, with their enemy hot on their heels the tapes will not only stop him in his tracks but also add to their notorious reputation, not to mention net worth.

Enter Wraith, the mysterious avatar that invites Jacobson and the Sky Thieves into a bidding war for the missing tapes. While Jacobson finds a way to outbid them and get them back, Wraith doesn’t make the exchange easy. This gives the Sky Thieves their chance to steal them back, unmask Wraith and put an end to Jacobson’s tyranny.

This thrilling read by Jason Kasper is filled with so much incredible intel on safecracking and cybersecurity, I wondered how an author could bring to life such realism without living it. But alas, Kasper is not a thief. He’s a former Army Green Beret commander—amongst other notable achievements, including best-selling author. And you can see why. The Sky Thieves each have their own incredible personalities and back stories but when you bring them together, it’s a thrilling mix, peppered with a touch of Robin Hood and Now You See Me. Cool read!

The Power of Intention: Learning to Co-Create Your World Your Way
Legacy