The Secret Journey of a Library Book
By Kimberly Monaghan on January 24, 2020 in Book Charities, Books Uplift 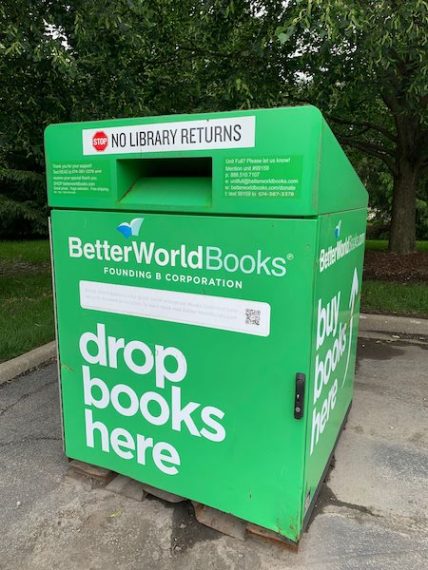 By Kimberly Monaghan on January 24, 2020 in Book Charities, Books Uplift

“Many people don’t realize that in order to make room for new books libraries have to get rid of old ones,” explains Catherine Savage, Head of Communications for the Vernon Area Public Library (VAPL) in Lincolnshire, Illinois.

This is one of the novel (pun intended) behind the scenes facts that most of us don’t know about our local libraries.

What we also may not know is what happens to those discarded books once they leave the shelf. Many libraries host books sales or recycle ones that are purely unsalvageable. But there are even more compelling and impactful journeys that most books travel on once they’ve lived their lives within those community walls.

When a new book is released, the library usually orders several copies so that patrons don’t have a long wait for their riveting reads. But when demand lessens, they may remove a book from circulation in order to make room for something new. According to Savage, many people are surprised to realize that books are being added and removed from shelves on a regular basis. “When we remove a book from circulation, we try to make use of any value that it may have left.” This is where the global journey begins.

“Our library has always had one program or another in place to share withdrawn books with groups that can really use them,” says Savage. “First dibs go to the local groups that we have long-standing relationships with,” such as sending nature-related books to the Little Free Library at a nearby forest preserve in the Chicago suburbs.

VAPL also delivers many junior-high fiction books to a local youth detention center where many of their library employees also volunteer to read to and tutor the residents. They also put aside compact disks for the Heritage of the Blind and send biographies to their local Veterans Administration center.

“Anything after that goes on to an organization called Better World Books (BWB),” explains Savage. According to BWB, their goal is to divert books from landfills by collecting materials and selling to support literacy, libraries and education worldwide. Books that cannot be sold are frequently donated to at risk communities across the country. Some of the amazing efforts of BWB have resulted in sending over 6 million books to Africa through Books for Africa and raising 9.4 Million for literacy and education nonprofits throughout the U.S.

So, the next time you hold a library book in your hand, think about what it took to arrive there and where it will go next.

“It’s fun to pull back the curtain and reveal the hard work (and statistic-based predicting) that goes into adding to, and subtracting from, a library’s collection,” says Savage. She encourages everyone to do their part by donating their gently used books into the Better World Book box behind the library. Not only will it keep the books out of your local landfill but it sets them off on a journey that will change lives in your community and beyond.

The Champion’s Mind: How Great Athletes Think, Train and Thrive
Heart on a String