The Trap
By Kimberly Monaghan on January 5, 2020 in Books 4 Fun, Books 4 Thrills 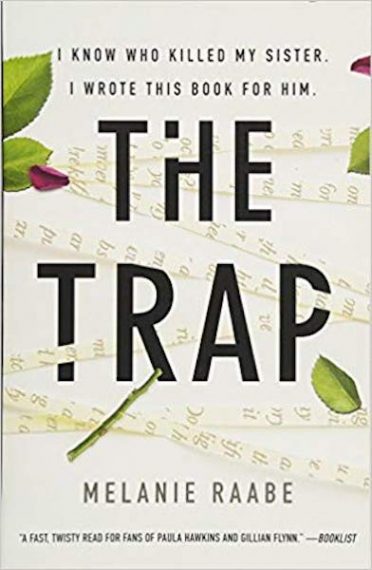 Linda Conrad is a bestselling author and a recluse. Since the violent murder of her sister, Linda has not left her house for eleven years. Consumed with guilt, frustration and fear, she leads a quiet and isolated life haunted by this unsolved mystery. Linda was the one who discovered her sister’s body and, at the same time, caught a glimpse of a man fleeing the scene.

Years later, Linda sees her sister’s murderer on television. Fearful that the police will not believe her, she devises a plan to elicit his confession. She writes her first ever suspense novel that parallels the story of her sister’s death in hopes of drawing him out of hiding and into her carefully laid trap.

What I love about The Trap by Melanie Raabe is the tension she crafts in the story that slowly simmers to a burn. Each chapter holds a new clue as to why Linda shut herself away and, of course, who is the real killer.

Let’s start with the emotions it extracts. Who wouldn’t be saddened to see a person so highly traumatized by an event that they become a prisoner of their own making? Then heaping on Linda’s already immobilizing fear, key players, including the murderer, leverage and play with her emotions so that she begins to doubt her own sanity and question all that she believed to be true.

In the book she is writing, her sister’s character is described as a perfect Disney Princess. And reflecting on this character she’s carefully crafted to resemble her, Linda reflects “seriously, if I were a woman…I might even detest her.” This revelation shocks her to the core. And coupled with the subtle accusations, she wonders, was she somehow responsible for her sister’s death?

Here’s a few other elements that made this a book I love. I enjoyed how the story unfolds alongside pieces of Linda’s novel. The mental and physical preparation that Linda embarks upon in order to be at her peak when she confronts the killer. And I love how the meeting turns into a game of cat and mouse before exploding into a confrontation that I didn’t see coming. With new clues and Linda’s new memories subtly sprinkled throughout each chapter, the plot twists are never ending.

But there is more to this story than meets the eye including broken family bonds and a lost love that need healing. Honestly, I could say this author thought of everything.