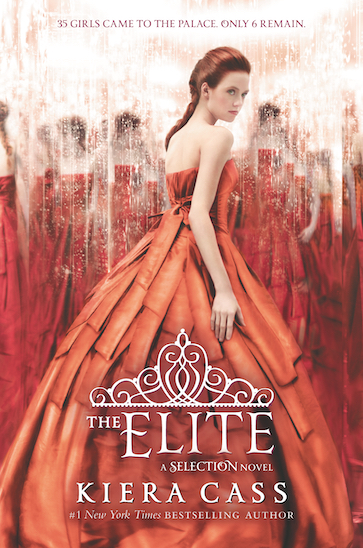 America Singer has made it to the Elite group—the finalists in the pursuit of the hand of Prince Maxon. As she is ensconced into the palace and the royal lifestyle, America faces head on what life might be like to be queen, including competition and bitterness from her rivals and the ever present threat of Southern Rebel attacks on the palace.

The world she experiences is so far from what she’s left behind; it’s beautiful, rich, posh, “like a fairytale,” and she is unwittingly drawn into the appeal of a life of what could be. But the constant reminders of her past and her true identity are haunting her at every turn; including Aspen, a guard at the palace and America’s first love.

The Selection series of books by author Kiera Cass is a bit like a young adult version of the Bachelor meets “Dark Side of Royalty,” where the enchanting competition and brutality of royal dominance are intertwined.

Okay, so what I love most about this fantasy series is the character America. Despite this series being fiction, she is very real and is meticulously created by the author to be rich with real emotional turbulence as she faces the tug of war with her identity.

The lure of this possible future proves strong and America is not only swept up in being part of the competition but also the cunning, as you could see any teenager struggling to thoughtfully navigate today. She is also compelled to know the secrets of Prince Maxon and understand her growing feelings for him.

This reader enjoyed the growth of the protagonist as a maturing young woman throughout the series and despite her flaws, mistakes and setbacks, roots for her to not only win the prince’s hand but make the right choice for her future.